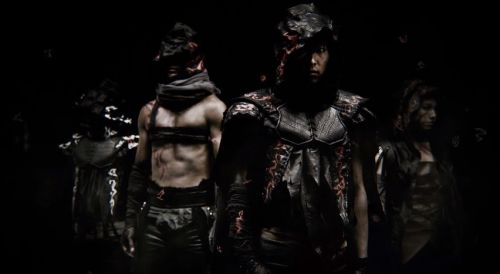 Soul Sacrifice is a little over a month a way, and I can honestly say I'm pumped for this one. The PlayStation Vita exclusive will allow players to make gruesome sacrifices in order to cast powerful spells. It also supports four player local or online co-op, so you can sacrifice and be sacrificed by your friends, as well. Neat!

The game came out in Japan earlier this month, and it appears to be doing well, both critically and commercially.  You can even try the demo yourself if you have a Japanese PlayStation Network profile. If you're the kind of person who needs a live action demonstration before you buy a product, I've got you covered. The Soul Sacrifice live action trailer is here, and it's satisfyingly ridiculous.

If you like your videos with more gameplay footage you can see almost seven minutes of action in then next video. This footage is taken from a title update that will hit the Japanese version of the game on April 4th. It features a battle arena inside a giant and a decapitated knight who uses his own head as a weapon, because anything else would be uncivilized. This will be one of many downloadable title updates to come, some free, some not so free. Enjoy.

Soul Sacrifice will launch in North America on April 30th.