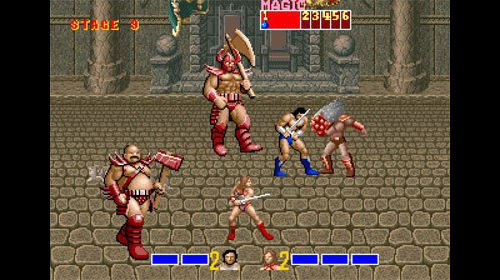 Why did they go "blah" when they died? - Golden Axe

As Sega's home console base grew with their Genesis system, they slowly began to bring some of their more popular arcade titles to the system.  Golden Axe was the first of these release in 1989, and is the first fantasy style beat em up we'll discuss.  Like Final Fight, players were given the choice of characters that not only were different in strength, but magic and weapons as well.  Golden Axe's lead developer, Makato Uchida, also went on to create another co-op beat em up in Altered Beast.  While Altered Beast did fairly well in the arcades, it truly took off on the Genesis system allowing players to take the role of an undead centurion with the ability to transform into a superhuman character.

While the Genesis had a few other popular beat em ups like Pit Fighter, the one that stood out was their exclusive console beat em up franchise in Streets of Rage.  While the first Streets of Rage offered 3 different characters to choose from and a moderately lengthed game, it was the second game  in the series that set a new bar.  Offering a full 8 levels chock full of a variety of backdrops and bosses, this wasn't a game you could sit down a beat in 20 minutes much like a lot of the previously mentioned titles.  It was a game designed for the consoles. 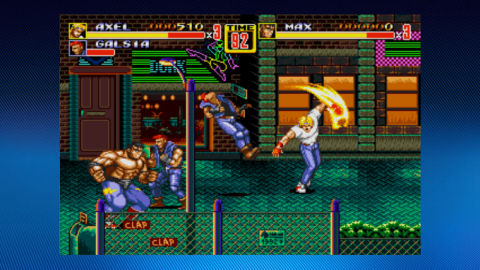 Nobody wanted to play the annoying kid on rollerblades.

As the consoles continued to show promise with some solid title, the arcades hit their pinnacle with two amazing games from Capcom.  Dungeons and Dragons: Tower of Doom (1993) and Dungeons and Dragons: Shadow of Mystara (1996).  These two games not only featured character building for players with seven different character types, but they featured puzzles and multiple paths throughout the entire game with quests.  Players earn experience, buy items, and unlock hidden secrets.  Featuring multiple endings it could take players weeks before seeing the entire game - a rarity in arcades.