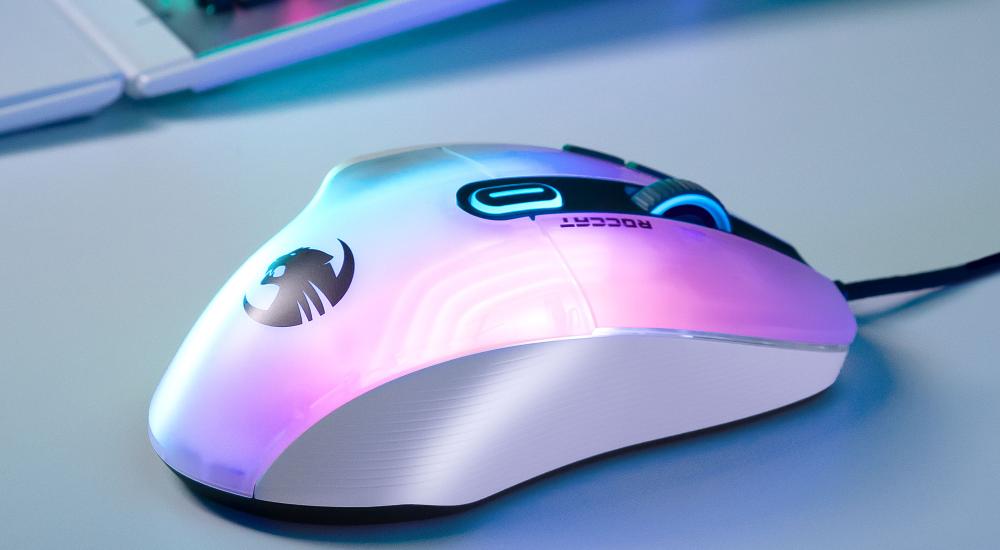 I've been fortunate enough to have a steady stream of PC gaming mice to check out, the last ones have been from ROCCAT. The Kone Pro and Burst Pro have been my daily mice for the last few months and I've been pretty satisfied with the quality and brand overall. The latest entry in ROCCAT's lineup is a return to the mouse that started it all - the ROCCAT Kone XP, a take on the Kone shape which is a derivative of the Intellimouse Explorer design.

Out of the gate the Kone XP is loaded with 29 buttons of use. At first glance this seems like something you'd only find in an oversized mouse, but what ROCCAT has done is created a shift mechanism on the bottom of the thumb rest that allows you to apply a second set of functions against the existing 14 other buttons. So you can left click or shift left click to perform distinct actions. The placement of the thumb button is perfect and there's enough pressure from it that you won't accidently press it with everyday use. The other standout feature of the mouse is its design. A semi-transparent shell gives way to 22 LEDs that create a 3D RGB effect sure to blind your pet hamster. It's bright, gaudy, and in line with today's RGB madness in PC gaming. Thankfully your hand will be covering the mouse most of the time so it's not much of distraction.

Under the hood of all those lights are a 19K DPI optical sensor, 104g of total weight, and a partnership with NVIDIA to take full advantage of their Reflex technology for the lowest latency possible. I'm not exactly sure how to test the reflex latency in everyday use - so I'm taking ROCCAT and NVIDIA's word on this.

One odd thing is the Kone XP uses the ROCCAT Swarm App while other recent accessories have been using ROCCAT Neon - this is definitely quite annoying as it seemed like Neon was their go forward platform and I could eventually retire Swarm. So if you are fully invested in the ecosystem you may have to run two separate apps just to get all the features out of your device. I've used the mouse extensively with Civilization VI, Risk of Rain 2, Destiny 2, and Lost Ark - so I feel I've gotten a good variety of games under my belt to see how the mouse performs. Each game had their own strengths and weaknesses. While I found Civilization VI offered the best customization, my muscle memory took a while to get over before I was comfortable with the hot key mouse buttons I had setup. Risk or Rain 2 had some trouble recognizing the shift function on certain mappings. For instance shift plus left click just registered as left click or other buttons registered as the number pad.  Lost Ark also had some issues, though it seemed like Lost Ark's was more intentional in the design of the game. Finally Destiny 2 felt really good and while I didn't make extensive use of the button customization the performance was really solid in a FPS setting.

The Kone XP is set at $89.99 which puts it on par with other mice in the category. I'd say if you are invested in the ROCCAT ecosystem and are looking for more button options, you'll be really satisfied with the XP. Otherwise it may be overkill for most situations and not all games will seamlessly take advantage of its features.