Speaking of user-generated content, one need only look at the mods for games like Half-Life 2 or Unreal Tournament III to know that there’s a booming community already in place for this stuff. While mods go back along way through games like Quake and Doom, there was one game that was released in the early 90s that came packaged with all the tools and devices you needed to make your own content quickly and, most importantly, easily: The Incredible Machine. 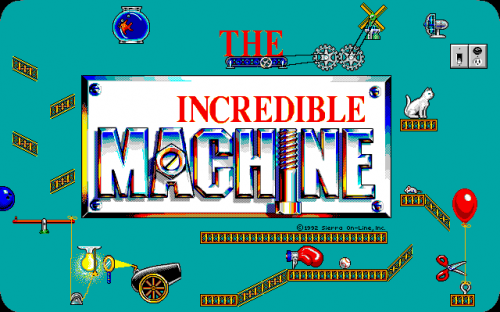 The Incredible Machine, and all of its iterations, was a series of Rube Goldberg type levels that required the player to fill in the blanks, or in this case, fill in the device. Essentially, for each level you were given an objective, some fixed objects already set in place to work with, and an array of additional objects and devices that you had to place in order to achieve the goal. By today’s standards, where every object and device has its own unique properties and physics behind it that would make outcomes practically random, this sounds impossible given the tools provided. Fortunately, this is a case where limited processing power and design resulted in a much better execution. The more stable objects you could use, such as ramps, walls, etc., had orientation and size limitations while the devices, such as trampolines, a candle and rope, etc., operated with set rules and limited physics. Thus while each puzzle had a few different solutions, all of them were fairly apparent when you saw what you had to work with.

Of course, the game wouldn’t be nearly as exciting if it stopped there. The Incredible Machine also had a “freeform” mode that let you build and design your own level. You could set your own goal and determine what devices/objects would be available to another player to use, or just build a complete Rube Goldberg device that caused the marble to roll down a ramp, light the candle, burn the rope, unleash the bowling ball, etc. All of the objects and tools were there at your fingertips and took little to no time to set-up and arrange within the world. Best of all, you could share those levels with your friends. Sure computer games and the Internet weren’t as well integrated as they are today, but all you needed was a 3.5” floppy disk on which to put the level file and then pass it along.

If you’ve seen any videos of LittleBigPlanet, or played the beta, that design aspect should sound incredibly familiar. Indeed, LittleBigPlanet’s design mode has a lot in common with The Incredible Machine. Both provide you with all of the devices/objects you need to create your own level; both allow you to share those levels with others (although LittleBigPlanet is on a larger scale); and both have worlds that are ruled by their own physics. While LittleBigPlanet may seem like it’s geared towards more traditional platformer-type level building, some of the more creative levels I’ve encountered thus far have used some form of a Rube Goldberg device to achieve a neat effect. Taking it one step further, pretty soon your Sackboy will be that marble that rolls down the ramp, which causes the candle to light, which causes the rope to burn, which… well, you get the picture. Better yet, your Sackboy will be the marble that can only go down the ramp with the help of a friend. 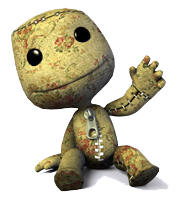 Often times it seems like the gaming community is so busy looking ahead at what the next big gameplay innovation or mechanic will be that it’s easy to forget how a lot of those earlier games got a lot of things right. Not always, but sometimes there was an originality or elegance in these early games that served as a genesis for the games of today. What’s even easier to forget is how so many of the aspects of gaming we take for granted today, like user-generated content or character customization, sometimes got their start with a system that could only handle 8-bits at a time. LittleBigPlanet may not be the most revolutionary game to hit the market this fall, but it is a part of the recent revolution of revisiting old ideas, old mechanics, and even old heroes.  And whether LittleBigPlanet fares well or falls flat, at least it got one idea right: games are about empowering the gamers and not just one-upping the competition.