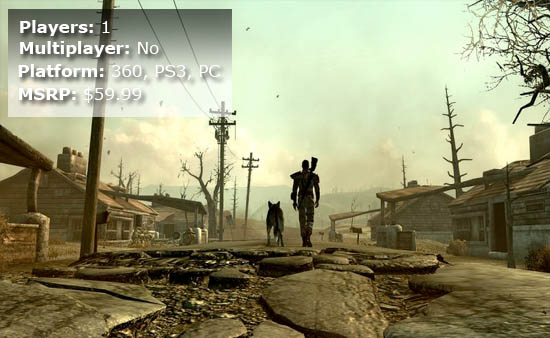 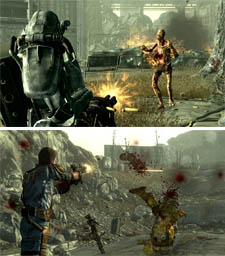 Bethesda is a company that seems to specialize in the open world RPG genre. With Morrowind and Oblivion under their belt they moved on to a franchise they recently acquired in Fallout 3. While fans of the series hoped for a more tried and true sequel with an isometric view game, instead they got something that Bethesda already does well; which holds true for Fallout 3.

Starting the game as a survivor of the nuclear war in a vault, you make your way to a the giant outside world in the area around and in Washington D.C. While the game is loaded with grays and browns, everything shows a lot of style as humans attempt to make due in theradioactive wasteland. Shacks built from scrap metal, forts built in radio stations, and towns built on highway overpasses all add to the game's personality.

The battle system in Fallout 3 is a hybrid of real time and/or V.A.T.S. The latter allows players to pause the action and focus on specific enemies and specific parts of enemies to do some truly massive damage. Fallout 3 isbrutal with blood and gore exploding just about everywhere, combined with the physics systems make for some truly sickly hilarious moments. My personal favorite is seeing how far I can make certain body parts fly.

There are flaws to be had, namely the story is fairly short without any particularly high or low points. There's plenty of side quests to complete thankfully. The other problem is the game is a bit of an exercise in inventory management, with constant healing of your character as well asmanaging your weapon states and weight.

With the freedom to play the game however you want, and four different endings there's a ton of meat here for your sixty dollars. Bethesda once again proves they are the masters of the open world RPG.