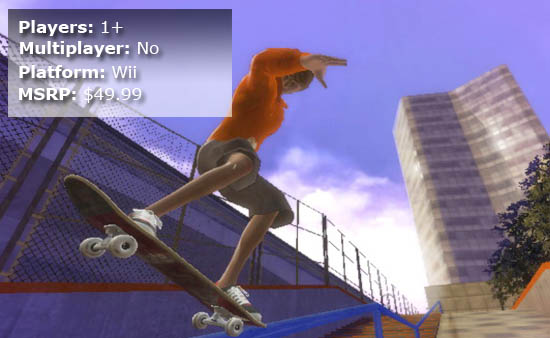 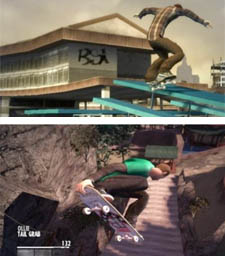 Skate It! brings the Skate franchise to the Wii. As the game begins, you learn that a meteor has hit the city, for some reason, and thus it's empty, wrecked, and ripe for the skating. You are joined by a radical and truly EXTREME camera guy, who comments on all your moves. No one else is to be found, which leaves you alone to skate all over the place.

As you'd expect for a Wii title, there are several control schemes. You can use a Wiimote alone, pair a Wiimote and nunchuck, or even dust off your Wii Balance Board. In theory, there should be something for everyone here. However, in practice, that's not the case. Using the Balance Board sounds fun, but the level of precision required to activate one of six different areas on the board is quite frustrating. Using just a Wiimote is nifty at first, as you tilt it to control your own board, and flick it to perform tricks. However, as with most motion controls, the consistency is suspect. We found ourselves using the Wiimote and nunchuck control scheme almost all the time. It's unfortunate that the other schemes just don't hold up.

Graphically, the game is adequate, but nothing earth-shattering. The levels are designed fairly well. Gameplay gets repetitive, with far too little variety tossed in. The fact that you never interact with or even see other skaters contributes to the sense of sameness. All in all, if you can get past the control issues, there's a fair game here, but I can't recommend it at full price unless you are a real fan of skateboarding games and only own a Wii.