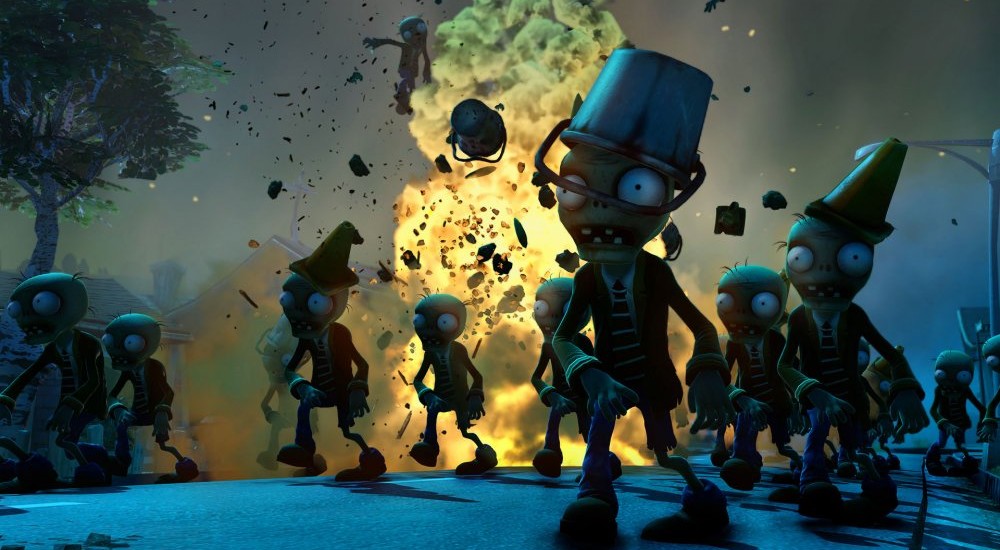 A Plants vs Zombies title might not seem like the ideal franchise to show off your next-generation hardware, but the reality is, Plants vs Zombies Garden Warfrare isn't your typical PvZ game. Borrowing heavily from another EA franchise (The Battlefield series) in both gameplay style and graphics engine, Garden Warfare brings a family friendly twist with co-op and competitive gameplay to the Xbox One and Xbox 360.

It should be noted that Plants vs. Zombies Garden Warfare is an entirely multiplayer affair. There isn't even a mode of gameplay for to bots fill in your party in co-op or challenge you in competitive play. That said, if you so desire, you are welcome to play the game's survival based Garden Warfare mode all by yourself, though, you'll miss a lot of what the game has to offer.

Being Co-Optimus we're going to focus mainly on the ten waves of the Garden Warfare co-op mode and the multiple classes you level up. But before we do, we'll talk about the other half of PvZ: GW - the competitive. The 12v12 mode has players jumping into the roots of plants or the boots of zombies each with four classes. Each class has a purpose and an equal on the other side of the line - you've got your assault, medic, tank, and damage dealer type classes - each with three special abilities that focus on supporting the team. There are two modes of play - Gardens and Graveyards which is very reminiscent of Battlefield itself; it tasks players with capturing points on a map from the opposing team while Team Vanquish is a simple deathmatch based affair. The maps available all have the same vibe and style, it's that cartoony silliness that oozes out of every corner of a PvZ game. It's charming, colorful and definitely attractive. In a way it's almost surprising to see a map built around a bunch of greenhouses show off a console's graphical prowess, but it does. If you stop and smell the virtual roses, you'll see some incredibly detailed textures and individually rendered blades of grass.

For the most part these maps are fairly spacious, but nothing like you'd find in a Battlefield game. The combat is quicker, more intense, and definitely chaotic. This mode, like Garden Warfare, will earn you coins and character levels which you use to purchase booster packs and unlock abilities for your characters. Garden Warfare pits four players against ten waves of zombies. The maps starts out with players picking from a handful of spots to plant their garden. Each location has its own benefit aside from adding some replayability to the map. For instance on the one map set in a town, there's a garden location near some warehouses that allows a more defensive strategy to be taken at the cost of space, while choosing the location near the mall provides more verticality to your defense.

The four classes at your disposal are the Pea Shooter, Chomper, Cactus, and Sunflower. The Pea Shooter is used to deal damage and is very mobile while the Chomper can be more defensive and one shot kill a lot of enemies by eating them whole. The Cactus as the ability to plant potato mines, walls, and even launch an aerial garlic drone while the Sunflower is your healer. All the classes start out with one ability, but you'll quickly unlock the rest of the abilities by simply playing each of the classes. One oddity though - if you unlock a new ability you can't actually use it till the round is over or until you die (and aren't revived). Players aren't restricted to one of each class in a match, so if you want you can have four sunflowers healing each other non stop while dealing damage. During co-op play we found that a buddy system worked the best, with characters pairing up and defending. Buffing players health as the sunflower is a no-brainer, but pitting a Pea Shooter with a Cactus also works wonder. While playing the Cactus a teammate planted himself firmly in the ground defending me while I launched a garlic drone to wipe out larger groups of enemies from the air.