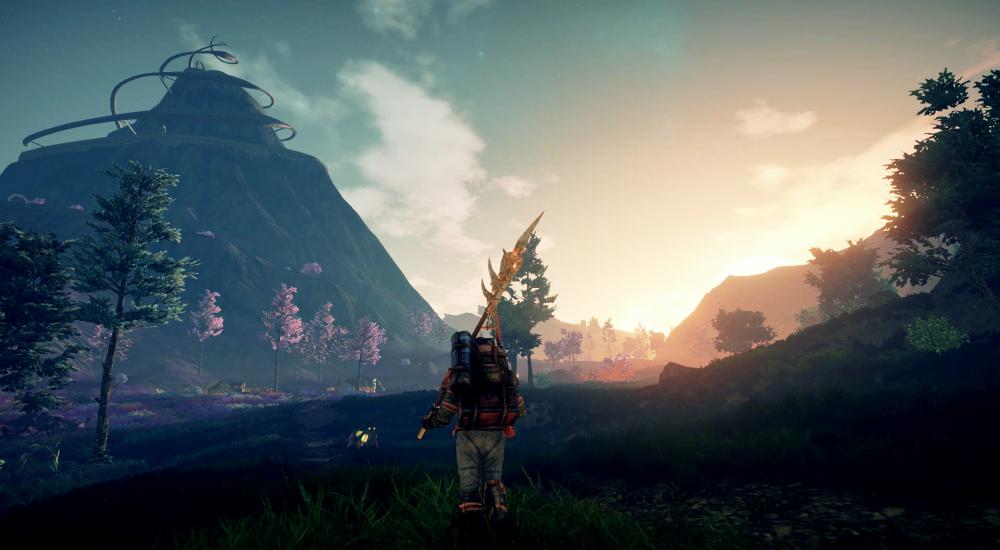 I stood on a mountain, my partner beside me, looking out across the land. I had just escaped a narrow death at the hands (paws?) of large dog-like foes and the only thought I had was “Well, now what?” This was not the first time and it would not be the last as Outward drops the player into a game world, shrugs its shoulders, and leaves the player(s) to their own devices, for better or worse; it is almost always, unfortunately, for the worse.

Outward is an open-world game that asks the question “You’re nobody special and you do nothing well; can you survive?” Rather than being a hero like in most games, you play, well, you - not a legendary warrior, not a Dragonborn, or any anybody. You’re just yourself… good luck! This idea captured me initially, as I loved the prospect of just doing my best to survive in the game world no matter how much it tried to hold me down, but Outward takes it to the Nth degree, making the constant struggle for survival feel like an excuse to mask actual gameplay rather than a design choice.

At the game’s open you owe an insane amount of money on your house that you must repay within a very short time, lest you get evicted. So you move around the city and gather the essentials in order to leave: backpack, weapons, water, and anything else you will need outside the safety of the city walls (bandages, food, etc). You set out into the unknown to try and amass enough to pay off your debt which feels like a relative fortune. If you die while you’re out adventuring and trying to earn money, a large chunk of time will pass before you’re revived, meaning you’ll likely lose your house. In my first and second attempts this is exactly what happened, leaving me homeless. The consequences of this were not fully explained, and it felt like failing, so I began my journey again. The third attempt yielded better results. Rather than leaving the city, my co-op partner and I picked up everything that wasn’t bolted down so we could sell it back to the folks of the village and scrape together just enough money to keep living among them. However, we soon discovered that whether we kept or lost the house, the only real difference was having a homestead in which you and any loot you may find can stay. As the game lacks fast travel (more on that later), using this home as a means of storage becomes an out of the way chore. Regardless of whether you keep or lose your home, you’ll eventually leave the city and will quickly learn that everything in the great outdoors wants you dead; but that’s ok - you grabbed some low-damage weapons so you can fight, right? Not if the game has anything to say about it.

Combat in Outward is consistently clunky. The game attempts to copy / paste Dark Souls’ fighting style with the player attacking and then blocking or rolling to avoid incoming attacks while trying to be sure not to deplete their short supply of stamina. However, Outward’s implementation of this system lacks the tight and frantic fighting that was so wonderfully balanced in the Souls’ games. In combat, each blow you land takes a moment of frame time for the impact. In this brief moment of time, however, the enemy is not staggered so they can continue to move and fight and will do so quickly - often pivoting faster than the player. Even a solid, well-timed hit from you can result in a counterattack so detrimental that you end up taking more damage than you dealt, even from the lowest level foes. To make up for the lack of quality, you will lock onto foes as you wildly try to pivot around them, swinging whatever weapon(s) you swept up on your way out of the city. The very backpack you choose to carry plays into all of this, too, as larger models add more weight and slow your evasion. There is a button that lets you take off your pack and pick it up again, which leads into this pattern of: combat starts, backpack gets dropped, win, recollect backpack, gather whatever loot you won, and move on. This became very tedious and lead me to try and find the best way to win a fight with the least amount of time consuming steps. In this case, it was to bait foes into one another and watch them battle to the death. Obviously this would be fun or funny for a while, but is by no means how I feel a video game should be played - relying on a sole oddity to the game’s mechanics doesn’t make me feel as though I’ve grown or become empowered as a player.

While using my baddie baiting strategy allowed me to acquire weapons that were not terrible, I was still actively trying to avoid combat as I had other things to tend to. In addition to your health and stamina, Outward also has hunger, thirst, heat, and cold as mechanics the player needs to be aware of constantly. There are also a number of ailments with which you can be afflicted that will be indicated through various on-screen icons, such as pain, sickness, confusion and so on. This left me moving around the great outdoors trying to find the means to survive and exploring the vast, empty game world. It was fun for a time - camping under the stars and sneaking up to land unexpected blows on animals so I would have meat to eat - but the map that you keep does not mark your location, which can often leave you feeling adrift. This also makes it challenging when switching your attention back to a quest you may have picked up, as you will have to piece together where you are in relation to where you want to be nearly every time. Altogether the goalless gameplay and the unhelpful map often left me feeling like a nomadic soul just looking for a place in the world.

Finding something to do and solve your directionless bumbling can be extremely tedious as well, as most of the NPC conversations offer little in the realm of prompts towards some grander quest. In one visit to the city, my partner found an NPC who wanted us to find a special item, so we ventured outside of the city walls again to discover the lost loot that was needed. It was fairly short work for my co-op partner and I to snatch the item from its cavernous resting place and return it to our waiting NPC, but it was during our retrieval of the item and the ensuing combat that the cracks in Outward’s co-op began to show. After we returned the item, we had to sell off the goods we looted off of our fallen foes so as to lighten the load in our backpacks. The money we gathered was used to learn new combat techniques - attacks that are tied to certain weapon types (one hand axes, daggers, swords, etc.). These can cause opponents to stagger, bleed, or a variety of other outcomes. Unfortunately, only specific techniques can be learned from the NPCs who teach them and the techniques are only learned by one player, meaning my partner and I will share money but will progress at different rates. These upgrades are also tied to the teachers who offer them, so if my partner uses a mace and there is no mace trainer in the city, back to the wilderness we go.

Heading off to another city to buy skills would feel like something interesting to do if Outward didn’t drag the player through every step of the journey. As previously mentioned, there is a weight consideration in Outward and it isn’t solely tied to the combat. General movement, like walking around, is affected, too. There is no fast travel or mounts of any kind in Outward, which makes the slow, dangerous travel feel tedious and lifeless. It was en route to another city that my partner and I began to realize that the game did not accommodate our co-op at all.

Weapons and items spawn in the same rates whether you are alone or with a partner and all the loot is shared between players, so items that are vital to survival (especially early on) may be provided adequately to one player alone. For example, you get a waterskin to help manage your thirst, but you are only given one regardless if you have a co-op partner or not. You can buy another after you acquire some money, but this feels like the game world was built with just one player in mind and with the scarcity and scramble for money early on, it only adds to the frustration. Enemies are also ill-prepared for co-op as their numbers are the same in single player or co-op, and their little brains become utterly lost when there is more than one target as they cannot decide on who to attack while they’re being beaten to a pulp by the other person. Ultimately, the difference of co-op in Outward is that the long spans of time spent walking, meandering, and trekking but actually doing very little are far easier to suffer through when you have a partner. Outward does not make co-op fun - playing co-op is fun, but Outward does the bare minimum to support it. If one searches the wilderness hard enough, they may discover that Outward has magic and spellcasting, too, but that is a whole other system buried inside of the game’s proud “we give you no direction” mindset. If you’re persistent enough to meander and seek out the ancient magics of the world, then you deserve them - they can change the flow of combat pretty heavily but they are so time consuming to track down you will likely spend hours to get them.

All things considered, if Nine Dot Studio’s (Outward’s developer) intention was to build a game that is not necessarily welcoming to players, but is very brutal, there is definitely an audience there to be had. However, such an approach requires a fine tuning where the game is truly fair but pulls no punches. This is missed by Outward, as the combat lacks the tightness and thought out process needed, the exploration is dreadfully tiresome, and the overall world instead feels like a trope of the magical worlds of other games it so clearly intends to imitate. As it stands, Outward feels void of life and depth in any genuine way.

Outward asks for a place among other games as it pieces out Dark Souls’ combat and the Sims player status management. Instead of striking the strong rhythms these games are known for, the game adds a sprinkle of co-op and then leaves you to your own devices, remaining void of fun stories to tell, interesting characters to meet, or wonderful things to find. Outward instead rests on clunky combat and odd design choices as an excuse for ‘difficulty’ or ‘realism’. The game gives players nothing and deserves little back. Co-op is the only palatable way to play, but with so many other co-op games readily coming to mind that are fun and rewarding to experience with a partner, it is best we leave Outward to answer a new question in response to its own “You’re nobody special and you do nothing well; can you survive?” Maybe, but is it worth it?

The Co-Op Experience: Team up with a friend on your couch or online to survive the world of Aurai