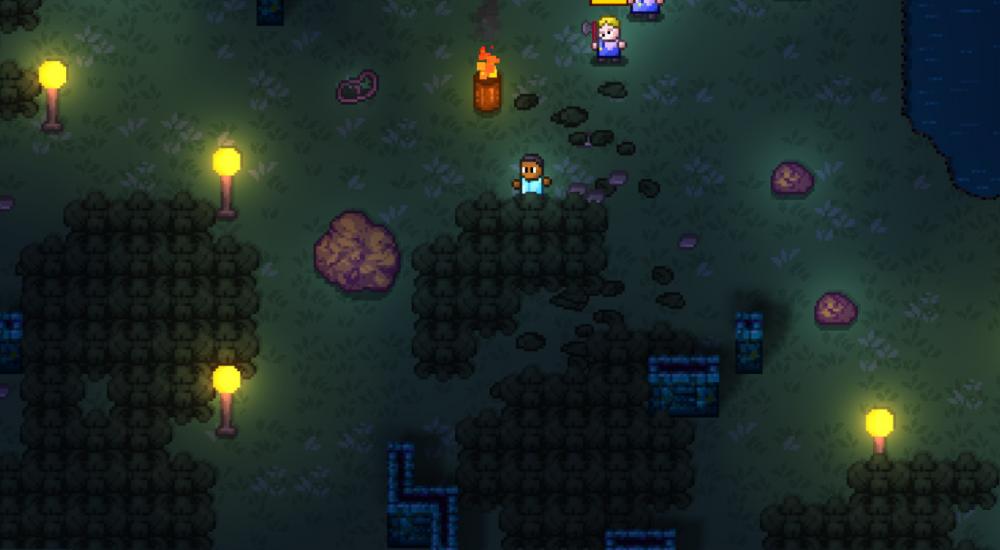 Much like a favorite meal, it is difficult choosing where to begin with Streets of Rogue. There are so many good choices that selecting just one thing feels darn near impossible. Fortunately, it also gives you plenty of reasons to come back for more. In a market saturated with pixelated indie titles, Streets of Rogue stands out as a must-play solo title and becomes instantly cemented as a classic when playing with others in co-op.

To start, the player is introduced to the world of Streets of Rogue through a hilarious tutorial that does a perfect job of setting the tone for the game as it shows that both intelligence and humor will be core components to the adventure. The premise is simple: there is an evil mayor who is doing evil things and the player must overthrow him by climbing through the various street levels. So the player sets off as one of the starting classes and attempts to complete random objectives on each floor, starting at the bottom (the Slums) and working their way up.

This game wears its identity on its sleeve, as it is a rouge-like and the title clearly gives that impression from minute one. Each floor is randomly generated and is littered with multiple, randomized objectives to complete. Once these objectives are at least attempted, the player can progress to the next floor. It is possible to fail these goals - for instance, a character dies that you are supposed to escort to freedom - and still progress. If the player manages to successfully complete them, then they’ll earn some experience points (more on this later).As previously stated, the objectives are randomized at the start of each map, meaning you may be neutralizing a target, smashing a container and retrieving something, blowing up an object, or any of the many, many other tasks that will help overthrow the evil mayor. While you will get a random map and random objectives each time you play, you get to select a character that fits your preferred playstyle, which is the most important choice you will make every run.

Selection of a character is vitally important to the gameplay, as each one has different skills, starting stats, and loadouts. If you are someone who wants to murder your way to your objective, you may consider a Soldier who uses firearms and regenerates his own ammo by killing people. Perhaps you would prefer to hack electronics from afar as a Hacker who can disarm cameras and turn turrets on their masters. There is a good selection of characters to start with but this number grows fast and intelligently as characters are unlocked via your actions, which pushes you to experiment. All of the unlockable characters show the requirements to unlock them, meaning that if you plan well you can find yourself unlocking characters at a rapid rate and finding a flood of exciting, thought-provoking ways to play the game.

These new characters completely alter gameplay mechanics. Vampires are strong but can’t heal by eating food (as all other characters do) and instead must nibble on necks to heal. Doctors refuse to wield weapons since their life goal is to heal people, and so on. The depth of the character selection does not stop at just the abilities though, as each character can be aesthetically altered and, more importantly, each has their own “Big Quest” along with the floor-specific objectives. This “Big Quest” is something personal that each character can complete for more chicken nuggets and a generous serving of XP; the Vampire must find and kill the Werewolf hiding out as a normal person on each level (oh Twilight, you hilarious reference, you). The Soldier must blow up the generators on each floor (because Soldiers blow up generators in video games, right?) Doctor’s cannot kill anyone, Hackers must install malware and so on. With your character selected, how you approach the objectives of the first floor and the minute-to-minute gameplay is completely up to you; or up to you and your buddies if you’re playing cooperatively.

In my time with the game I played on the couch with 2 friends who also wanted to overthrow the mayor, though up to 4 players are supported both in local co-op or online (no combo co-op here). I spent more time with the couch co-op as it was great fun to listen to my partners make due with unexpected, chaotic situations, and Switch online has no easy voice chat options. When playing with my partners, they picked a Hacker and Soldier while I picked a Doctor; this allowed us to break into buildings from the inside via hacking, chloroform people as needed using the Doctor’s skill, and return fire using the Soldier’s loadout of weapons if things got heated. This lead to some truly hilarious and memorable moments as my partners were more apt to create chaos than practice patience and wait for one person to use their special skill when the situation called for it. While causing chaos and griefing one another can be wicked fun for a bit, but if you want to progress with any meaningful amount of XP, you'll need to take a crack at those objectives.

As mentioned previously, the completion of objectives provides experience points (XP). The game remains fair by giving XP to each player and their character based on what they complete and additional XP if the floor is cleared fast and non-lethally. For example, if player 1 knocks out an enemy and completes an objective, they will be rewarded with XP for the knockout and the objective, while the other players will just earn the objective XP. Additionally, the player that completes the objective will earn some bonus rewards, such as weapons, tools, or consumable items, which will greatly assist you in completing later levels. While tagging along simply to grief can be its own kind of fun, your stints of chaos will eventually be cut short as foes become progressively more complicated and challenging. So, as always, the most efficient way to get furthest is through teamwork and cooperation. As you level up, you will be provided a few chicken nuggets (more on that in a minute) and a number of perks from which to choose at the end of each floor. The exact number is based on how many levels you gain; so if you level up once during a floor you pick one perk, if you level up twice you get two perks, and so on. These perks will remain with the player for that playthrough and can dramatically change the gameplay as they range from doing things such as hacking or lockpicking faster, knocking enemies back further, melee weapons lasting longer, and so on. Again, this works astoundingly well as choosing perks that fit your playstyle only furthers your ability to “play your own way.” Playing as the Doctor I found myself choosing perks that made me move and do things faster so I could be swift as I picked a lock before swooping in behind someone to chloroform them.

As this is a rogue-like you will die before you succeed, and upon the death of your party you will be sent back to the base which works as a pretty basic hub area where you can run around, alter the number of players in the game, and choose characters for your next run. Once here, you can also spend the aforementioned chicken nuggets you have earned to permanently unlock different perks or new items (such as weapons and tools) to appear in future playthroughs. There is also the option of spending chicken nuggets to add to your loadout for only the next playthrough by giving you a medkit to heal or maybe a weapon to begin with, but this is something I only used after being hours into the game, since I would rather spend my nuggets on things that will stick with me forever than single-run items.

All said, Streets of Rogue offers excellent gameplay which is only made better by co-op. However, co-op is also the only place where the game stumbled a bit in my time with it. First, friendly fire is on in co-op, and if this is an option that can be turned off I was unable to find it. This has hilarious outcomes at times (as the Doctor I could render my companions unconscious with a little chloroform), but this can and absolutely did lead to some griefing, whether good-natured and hilarious or ornery. Further, as previously mentioned, I played the game on the Nintendo Switch and while the local co-op was outstanding, I found the online experienced lag issues as well as items sometimes appearing as colored geometric blocks rather than actual items. When the game picks up momentum these issues can literally be life and death, as I was stormed by NPCs who were able to kill me as I could not differentiate between different items to pick up since they all looked the same. While this could be exclusive to the Switch, it was absolutely frustrating to be blindsided and killed by the game stumbling to keep up with itself. That said, the local co-op never had these issues and worked perfectly no matter how crazy things got on screen - though I would recommend locking the screen to split screen to easily keep you and your partners apart as the default, auto-separating screen feels too busy. Streets of Rogue is great to play by myself but better with partners. There can be some frustration in everyone doing their part, but the feeling of running a perfectly in-sync operation with your ragtag crew of misfits is a genuinely special moment. If that isn’t for you than perhaps you and your co-op partners can all just be Gorillas and kill everyone in your way. Streets of Rogue, and all of the hilarious, smart, snarky, memorable, and truly excellent gameplay wrapped inside, is nothing short of incredible and a must have.