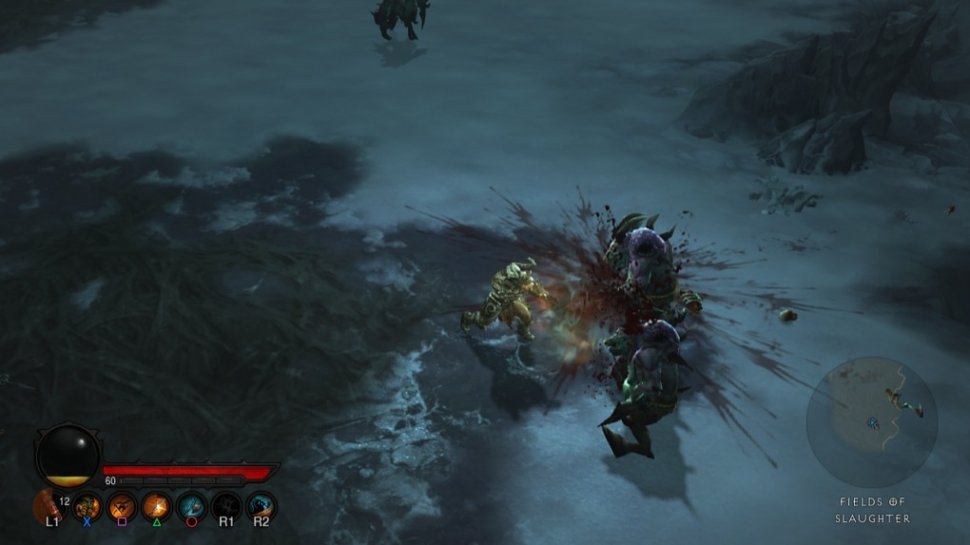 While there is quite a bit of buzz in the air today for Microsoft's big reveal of the next Xbox, Sony is working on putting out as much information as possible to get folks excited for the PlayStation 4. This includes discussion of the console port of the popular action-RPG, Diablo 3, which recently celebrated a year anniversary since it first saw release on the PC. A console port of the game seemed highly unlikely at first, despite the great deal of speculation, but along with the announcement of the PS4 came the bit of news that had thousands across the internet shouting "I KNEW IT!" This was immediately followed by a thousand more cynical statements of, "psh, it'll never work. PC MASTER RACE!"

An early playable version of the game was available at the recent PAX East event and Tally provided some of her impressions of what she liked from her time with it. One of the big items that came from this play session was the change to the overall UI. PC players are well familiar with all of the in-game menus you can bring up to check your skills, inventory and character stats, achievements, etc., and are likely just as familiar with how much of the screen those menus consume. Blizzard wanted to provide as fluid a UI for console players as possible so you didn't get frustrated switching gear in and out. Three of the developers from Blizzard that are working on the console version, John Hight, Josh Mosqueira, and Jason Bender, discuss these changes in a recent video on PlayStation's YouTube channel.

A few quick highlights, in case (like me), you watch the video in 30 - 60 second bursts while doing other things:

1. Towards the end of the video, Jason Bender discusses playing with friends locally AND online (our term for this is "combo co-op). At the PAX East event, Tally asked the Blizzard dev if the game would support this feature and "they still discussing it." Perhaps this is confirmation that the game will support it after all

2. Alluded to in the same impressions piece, console players will get a roll maneuver that allows them to dodge attacks

3. Not a lot of discussion about how the PS4 controller's touchpad will be used, but the implication seems to be that the shift to radial menus will allow users to select and go through items using the touchpad

There's still no set release date for when Diablo 3 will see release on the PS3, or if the PS4 version will launch simultaneously with the console itself. While I'm unsure if I'll be picking up the console version and grinding my way through yet another playthrough, I am encouraged by some of what I'm seeing with their design choices.

But what about you? Are you excited for the console release? Does any of this discussion of the changes made for the controller put your mind at ease?