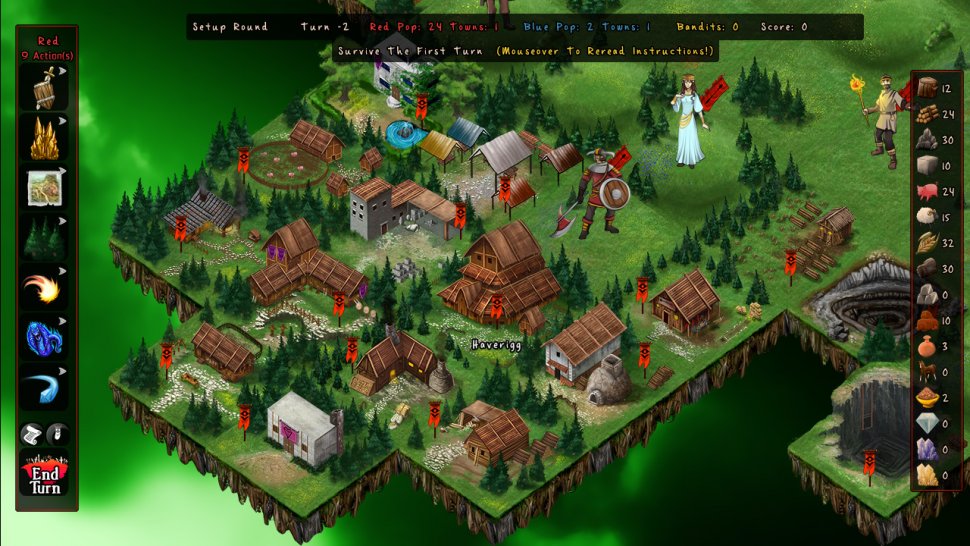 [Update]: Skyward Collapse is now available on Steam for less than $5.

When we spoke with Arcen Games' Founder/CEO/Lead Programmer/Lead Designer Chris Park last month, he talked about two of their upcoming co-op titles: Skyward Collapse and Exodus of the Machine. Hard as it may be to believe, Skyward Collapse sees its release on Steam this very day, and it brings with it an eight-player cooperative mode. That's a lot of friends to help you create a civilization!

As is their wont, Skyward Collapse is unlike many of Arcen Games previous games, and yet shares that one characteristic that makes it undeniably theirs: it is a fusion of a few different genres. It is described as a "turn-based 4x strategic god-game." In it, you and your friends take on the roles of creators that are developing not one, but two opposing civilizations. All you have to do is keep them alive until "The Master" (aka Mom) calls you home. This wouldn't be such a problem if the two civilizations weren't trying to kill one another, or kept getting attacked by bandits, vegetarians, and other life hazards. The unique twist in all of this is that while you can influence each civilization's technology, religion, and other elements, you cannot directly tell the people what to do or where to go. It's a game more focused on the subtle influence than the outright "OBEY ME!" seen in other games of similar ilk.

- A turn-based strategic god-game where you control neither faction, but instead strive to maintain the balance of power.
- Make towns and war as the boardgame-like floating continent continues to construct itself around you.
- Persuade your minions into doing what you want by controlling the circumstances of their (brief) lives.
- 16 gods, each with unique passive abilities and three active powers, help you further your goals as you pass into the Age of Monsters.
- Level up your player profile by winning games. Twelve unlockable buildings in all!
- Straightforward controls paired with an intuitive and helpful interface make this an easy title to pick up... but the strategy runs deep.
- Multiple difficulty levels let you play a very relaxed game up to a nail-bitingly difficult one. There's no one best way to win!
- Co-op multiplayer for up to 8 players.

In addition to that, Arcen has released a trailer to show off some of Skyward Collapse's action:

One of my all time favorite "god-games" was Populous on the SNES. I remember renting that over and over again trying to get all the way to the end. From what I'm seeing, Skyward Collapse certainly appears to draw inspiration from that classic and I'm eager to check it out for myself soon enough.

Skyward Collapse will be available on Steam and the Arcen Games' website later today.