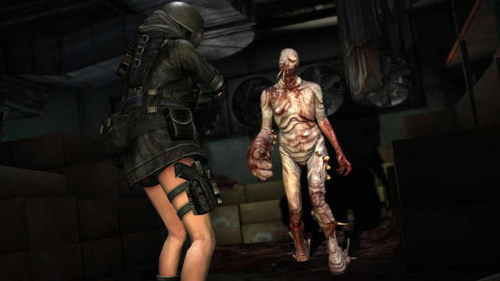 Resident Evil: Revelations was something of a mixed bag for RE fans. On the one hand, it was a "return to roots" in some ways as all the classic design mechanics of the original (like "tank" controls and tight corridors packed with foes) returned. On the other, it was still a modern RE game and that meant some weird plotting and bad voice acting. One of the best features of the game, however, was its Raid mode, which allowed you to team up with a friend and fight your way through missions in order to get money/points so you could upgrade and clear more missions. The mode included the ability to select from a few of the game's more memorable characters, along with some alternative outfits that can be unlocked.

As we mentioned just a couple weeks back, additional characters would be added to the Raid Mode and story mode roster via a second round of DLC. The DLC, which adds the Rachel Ooze and Lady Hunk characters, hits tomorrow for the Xbox 360 and PC, and Wednesday for the PS3 and Wii U. Each character will set you back $2.99.

Check out this lady and... I dunno, this mutated-lady-zombie-leech-thing, in action in the videos below.