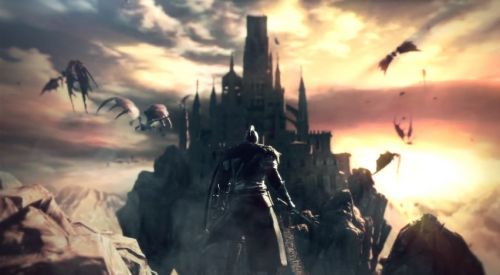 The one bad thing about Locke, Mike, and Andrew all being at E3 is that any news regarding Dark Souls 2 will be strongly muted from the rest of the staff. I mean, if you've listened to any episode of the Co-Opticast in the past few months, you know just how much they love the original. Nick and I? We're rather "meh" about the whole thing. However, this new trailer for the game, showed off during Microsoft's press conference yesterday, certainly seems to make the new title seem... I dunno... exciting? There's still a lot of death to be had, though.

Titled "I am Undone," the trailer starts off with a vaguely Smashing Pumpkins-esque sounding song (though I'm told it's actually Nitzer Ebb's "I'm Undone") and proceeds to show off a character kicking butt, and receiving a fair number off butt kickings in kind. There may be some deep analysis of what's shown in these brief clips that Dark Souls fans will be able to point to and say "that's new and changes everything!" All I know is the trailer certainly portrays a more hopeful and badass view of things than will actually be the case in the game itself.

There's still no firm release date for the game, yet, just the far off promise of "March 2014."