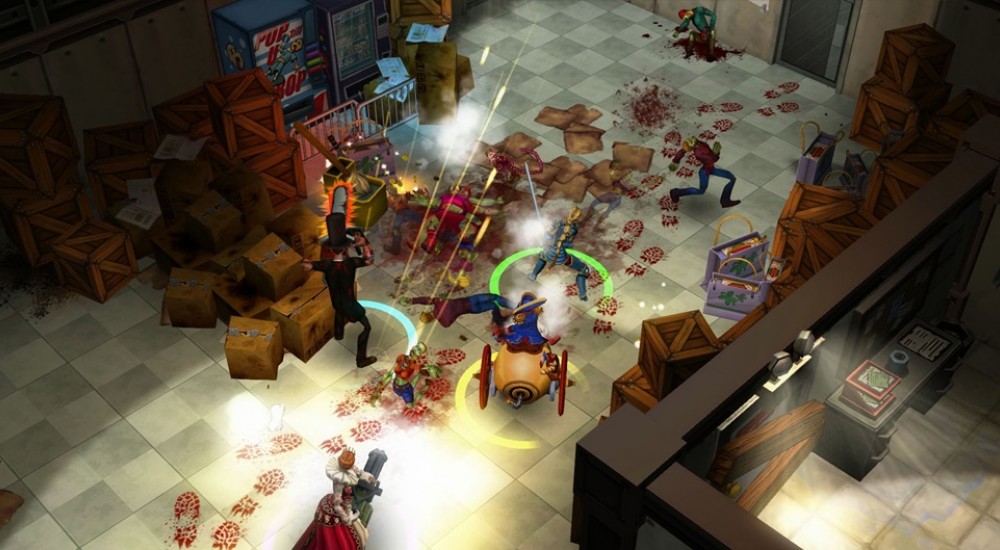 What do you get when you mix historical figures from across the centuries and continents with a semi-humorous and semi-pointed message about the world’s excesses leading to its demise? To be quite honest, I’m not entirely sure, but Rocket City Studios has given us Second Chance Heroes as one possible interpretation. Blending a comic-book style with four-player action co-op, its an interesting beast, but one that has a good deal of promise.

“Made weak by over-exposure to kitten videos, reality TV, and ironic photos of bacon, the citizens of the modern world are entirely unprepared when the end of the world arrives!” That’s the setup to the events that unfold in Second Chance Heroes. The only way to stop these evils is by putting together a team of historical figures, ranging from Abraham Lincoln with a chainsaw to Napoleon Bonaparte riding on a cannon, and taking on zombies, wolfmen, vampires, and other assorted monsters. It’s definitely different, and more than a little bit quirky.

Each stage of Second Chance Heroes essentially boils down to the following: fight through a bunch of rooms, encounter a mini-boss, then fight your way towards the final boss of the level. It’s very reminiscent of the mid to late 90s versions of Gauntlet that added a little more to the classic hack-n-slash dungeon experience, like goals in each level that vary from collecting objects to killing certain enemies. There’s even some basic RPG elements like upgrading your heroes’ life and attack power using money earned throughout a stage. It’s a callback that falls just short of an “Insert Coin” graphic on the screen.

When it comes to co-op, as you battle your way throughout the stages you can be joined by friends you know and friends you haven’t made yet (read, “random gamers”). With each hero having his or her own particular focus (i.e., melee vs range) and special ability, utilizing an array of heroes to take down the various foes you face is more beneficial than going alone. Each player can select two heroes at the start of the level, and freely swap back and forth between them throughout the mission. When playing solo, this may lead to your own Joan of Arc/Napoleon Bonaparte dynamic duo you dub “The Fierce Force Majeures,” but you can’t play both at the same time. Instead, you have to swap them in and out like a WWE tag-team match where there are absolutely no shenanigans. Perfectly understandable from a gameplay perspective and it creates an ideal situation for more friends, fun, and insanity.

The character swapping mechanic also provides solo players a chance to try out a couple of different protagonists during one level without getting bored of the same old routine. However, as with so much of Second Chance Heroes, it really seems to shine when playing cooperatively. Think about it: how often have you been playing with a group of friends and one player gets tired of playing the same character/being in the same role the whole time? How often do you get tired of it? By having two playable characters at your fingertips with the mere press of a button, you help relieve some of that tedium. One player gets tired of hanging back and shooting? No problem. He or she just swaps out for their pre-selected melee character while someone else switches over to ranged. Not only does everyone get a chance to try their hand at something different, but you also effectively double the number of special abilities at your disposal, which comes in handy for some of the later boss fights.