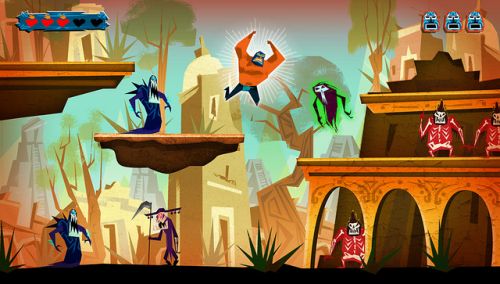 We're not ones to monger, but have you heard the buzz around the hive? It seems Drinkbox Studio's Guacamelee will slather itself on PS4 and Xbox One consoles in spring 2014. It's bringing with it a fistful of new content for its next-gen debut, including two new worlds, enhanced visuals, and a "chicken bomb" ability.

The rumor is based on an article that appeared on IGN that has since been removed. The internet never sleeps, of course, so plenty of eyes saw the leak and started blabbing. As far as rumors go, this one sounds surprisingly tame, and therefore more plausible. If we're going to spread unconfirmed information, why not crazy it up a little bit? We heard there's going to be a secret hot coffee nude mode in the new Guacamelee. Yeah, that's right. You just have to know the secret code to unlock it. And nobody's going to tell you the code because the NSA stole it and gave it to Obama. Yes, rumors.

On the non-fabricated side of things Guacamelee and its two local player co-op support is already out for PS3 and PS Vita. An enhanced Guacamelee Gold Edition also hit PC a few months back. Part action game, part platformer, part brawler and part metroidvania, Guacamelee stars Juan Aguacate, a down on his luck farmer who travels through the worlds of the living and the dead to rescue the love of his life. A second local player can join in for some nice co-op play, allowing the two of you to beat up everything that moves... in style!