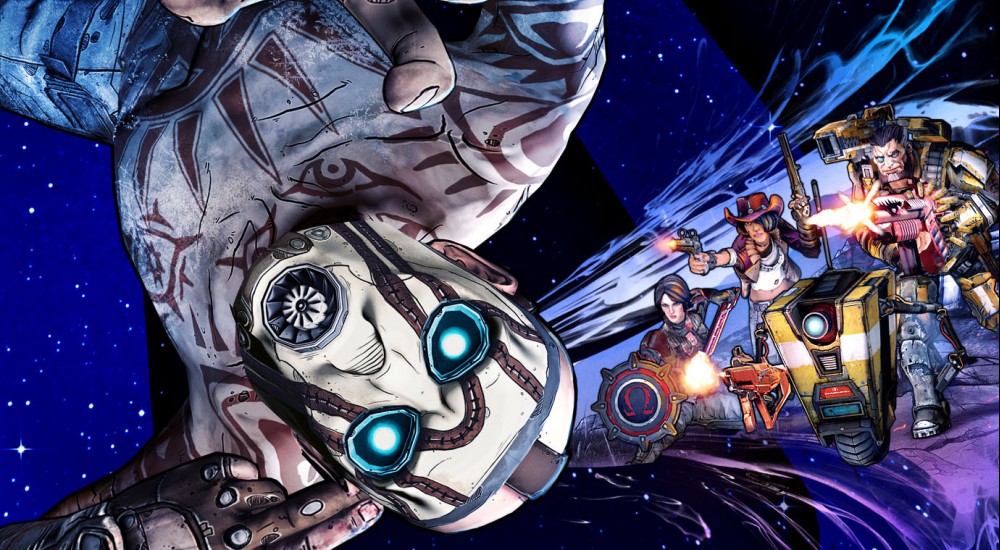 This past weekend at PAX East 2014, I had the chance to see a demo of the newly announced Borderlands: the Pre-Sequel. Since the game was so freshly announced, the demo was a hands-off affair, but there was still much to see and learn about the newest installment to the Borderlands series.

Borderlands: the Pre-Sequel (henceforth BL:PS) takes place between Borderlands and Borderlands 2, and one of the really neat things about it is that the four new playable characters (Athena, Wilhelm, Claptrap, and Nisha) have all been characters in the previous games. The story will follow Handsome Jack’s transformation from hero to villain as well as provide an explanation to why Elpis (Pandora’s moon) looked like a normal moon in BL1, but is a destroyed mess in BL2. You see, BL:PS takes place on Elpis, complete with low-gravity, oxygen kits, and lasers. The demo I viewed was a completely live demo, with our perspective from a player who was controlling Athena, the Gladiator. Athena’s power is the kinetic aspis which she can pull out to absorb damage. She can then throw her magnetic shield at enemies to discharge that absorbed damage. On the co-op-oriented side of things, Athena can skill an ability that allows friendly fire on her aspis. This way her friends can unload a bunch of damage on her before a fight and she can wade into battle with a nuke ready to go. We were also shown her capstone ability in one tree, which allowed her shield to ricochet up to 5 times between enemies, Captain America style.

Athena was teamed up with another player who was playing Wilhelm. You might remember Wilhelm from BL2, but you might not recall him as being exactly human. During BL:PS, players will witness his transformation from human into something decidedly more robotic in nature. His active ability was not described to us in depth.

One aspect that was quite well described was the oxygen kit. Oxygen (or “Oz” as the devs have nicknamed it, since “O2” looks an awful lot like “Oz”) is a new resource in BL:PS. When players are walking around outside in non-oxygen-shielded areas, their Oz bar will slowly drain. It was emphasized that BL:PS is certainly not a survival horror game, so it appears that the risk of death from oxygen deprivation is fairly low. Oxygen vents are spread throughout the moon’s surface as well as Oz field generators, which set up an environment with oxygen. Oz kits are pretty similar to shield kits in that they will have different capacities and different effects. Any Oz kit will let players vent air downward while jumping to jump higher, or in any direction to get a boost in the opposite direction. Oz can also be vented upward to slam back in the ground, which the devs affectionately call the “butt slam,” or more simply “slam.” Slams can do more damage and Oz kits can even have special slam effects. Venting one’s Oz kit, however, will of course use up some of the oxygen held inside. The new low gravity on the moon makes for some pretty entertaining stuff. Expect some ridiculously long jumps (aided by a vented Oz kit to make the jump even longer) as well as enemies spinning off slowly into space when hit by a grenade. There will also be two new damage types: cryo and laser. Cryo damage will freeze enemies who can then be shattered. Laser weapons will come in a variety of types, from “pew pew” lasers to beam lasers.

I went into the demo telling myself not to be too excited, but when I came out... well, I was pretty excited despite myself. I really enjoyed BL2, and gameplay-wise it looks like BL:PS doesn’t mess with any of that and adds on some pretty cool new stuff. The Gladiator looked like a fun class to play, and I don’t even like tanky classes usually. We’ll be sure to keep you guys up to speed as more details are revealed in the future.