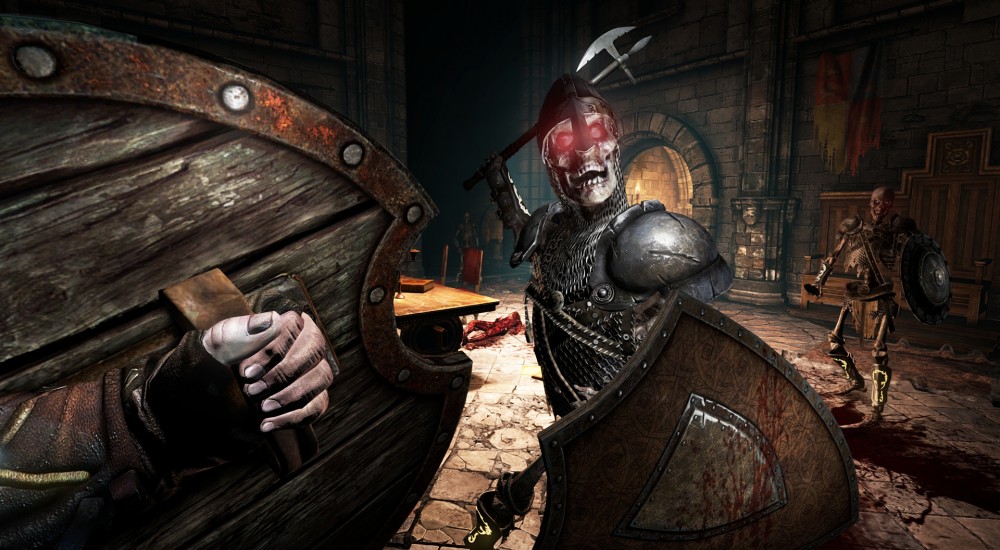 I had the pleasure of growing up and witnessing first person shooters since their birth. While not hte first, DOOM ignited the genre and then spun off several other thematic games. One of my personal favorites was the Heretic and Hexen series of shooters, which took the demonic theme of DOOM and changed it into a fantasy setting. Hellraid, from developer Techland, looks and feels very much like those games - putting players into dark and gritty dungeons, swamps and forests as they take on mythical creatures.

We we're shown a recent build of Hellraid during a demo at E3 2014 showcasing one of the game's three modes of play - the story. Graphically the game was looking impressive, conveying a dark and dreary atmosphere while still keeping a clean color palette present. This wasn't just dull browns and grays but subtle uses of blues, golds, and whites to set the mood. The player was tasked with finding an undead monk in a monastery and with environments designed by a real architect that specializes in gothic design, they looked incredibly detailed with stone arched doorways, large paned windows, and much more. Combat was straight forward with two types of melee attacks at the player's disposal, heavy and light. The style of these attacks are changed depending on what kind of weapon you are holding. A heavy attack with a sword might only take a second or two to deliver a blow while a heavy attack with a hammer could take a five seconds. Weapons also have different angles of attack, which changes how enemies stagger and receive damage. In one section of the demo a skeleton had a shield that blocked attacks with a sword, so a quick switch to a two handed heavy weapon with an overhead attack help stagger and eventually bring him down.

But melee weapons weren't the only offensive capability at a player's disposal, magic staves that shoot fire, lightning and even ice were found throughout the level. Another way players can dispatch enemies is using the environment. In one area the demo'er came upon a group of skeletons and cut down a chandelier to make quick work of them.

While some enemies were quick fodder taking only one or two strikes, bigger enemies required strategy and careful timing with attacks. It was easy to see how a player can be overwhelmed if they aren't careful with their offensive choices.

Hellraid features full four player online co-op in any of the game's three modes - story, mission and arena. The latter two are designed for replayability and high scores and Techland promises to reveal more on them later this year with a strong possibility for testing during their early access phase on Steam. Speaking of platforms, Hellraid will launch on Xbox One, PS4 and PC next spring.

I was a bit disappointed I didn't get my hands on the game, and we had to watch a developer demo, but that's only because I...REALLY WANT TO PLAY HELLRAID. I'm looking forward to rekindling the co-op fun I had in the days of Heretic.