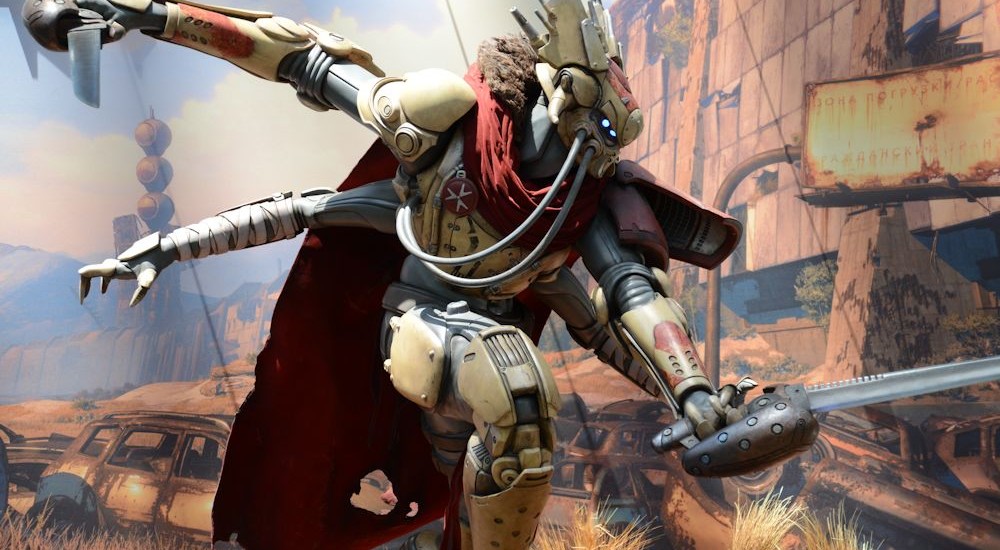 If you've been anxiously awaiting Destiny and own a PS4, then there's a good chance you are currently playing the public alpha. During E3 2014 we got some hands on with the very same alpha, playing with PSN players and show goers alike, but with a guided tour provided by a Bungie rep. Unveiled to us were the ambitious plans of the former Halo developer, crafting a socially connected world with a deep back story and plenty of content to keep players occupied.

After completing a bit of a tutorial you are placed in a location called The Tower. This is your hub for everything within Destiny and it's the only place where combat does not occur. It's here that players meet up with their friends or random hunters to take on missions together in co-op play. While traditional MMOs require load split across servers for both optimization and for clarity in larger player hubs - Destiny doesn't require either. You see, while in this HUB Destiny will simply make sure your friends show to you and you to them and then fill in the rest. That said, we were told there's still some backend stuff going on and part of the Alpha and Beta tests are to see just how to logistically handle server load.

Back to the Tower - it's also a place you'll be able to buy items, gamble for new items, gain quests, and bust out a dance party. It's an MMO - you know there's a dance emote.

From the Tower we took on a three player co-op strike called "The Devil's Layer" with each player taking the role of one of the three classes; Hunter, Titan and Warlock. Each class has an arsenal of special abilities available to them which are unlocked by gaining levels. I played as the Hunter with the ability to spawn a "Golden Gun" which one shot kills most enemies. Locke played as a Warlock while our guide was a Titan.

Perhaps the one thing that's most interesting about combat in Destiny is it feels a lot more fluid. Players can jump and double jump out of danger and up to vertical areas. Special abilities help with an ebb and flow of enemies and your three guns (which you can customize before a mission) give you just enough variety to handle every situation. Overall it was clear that in three player co-op, each person's abilities were needed to successfully complete the strike. I found as the Hunter with a sniper rifle I had to take care of any opposing snipers or ranged enemies wailing on our Titan. The Titan's ground slam came in handy to scatter a large group allowing the Warlock to pick them off easier. Using these specials causes the enemies to drop orbs which the other players can then pick up - which boosts their ability to cast their own specials faster.

Outside of these co-op combat missions there's free roaming areas, PvP and social encounters to explore. We were also told there's a good possibility for six player co-op RAID missions coming sometime in the future - these would feature much larger and harder bosses than the spider tank seen in the strike in the alpha build.

What's really interesting is at one point during our strike we saw another character taking on enemies. I asked who that was and the rep told me it was someone active on PSN. Another way the game allows you to join up with friends and random folks is during missions themselves. You can simply walk up to them, emote, invite, or whatever to get some group gameplay going.

Destiny's strength is going to be its ability to let players customize every aspect of their character. Not only the look of the character but the weapons and armor you pick up can have different aspects tweaked, upgraded, and enhanced. The example was given that if you really like a helmet for your character you don't necessarily have to change the entire thing just because you pick up a new helmet with better stats. Those space ships that fly between missions and areas? Those are going to be completely customizable as well.

Locke and I came out of the demo and immediately wanted more. It's clear Destiny is an ambitious title from Bungie and there's lots of promises. The alpha has given us a very, very tiny morsel to sample. If Bungie can deliver and everything works as intended, we may have one of the best co-op games to come around in years.

Luckily we won't have to wait long to find out as Destiny is out on September 9th, 2014 on the Xbox One, PlayStation 4, Xbox 360 and PlayStation 3. Pre-ordering the game gets you guaranteed beta access in July.