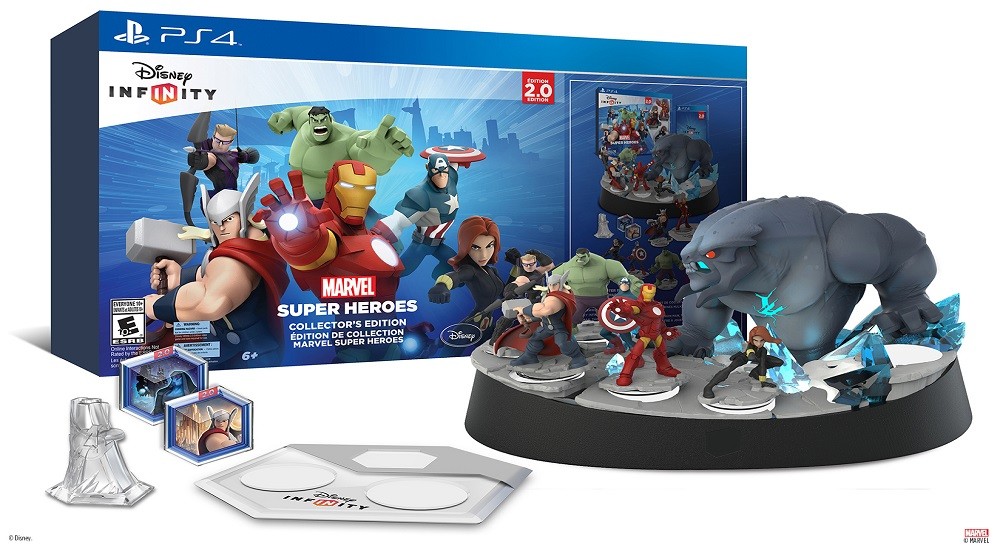 As if there was more incentives to pick up a PlayStation, owners of the platform will be getting an exclusive Collector's Edition of Disney Infinity: Marvel Super Heroes this fall. The edition is an easy way to pick up all the Avengers figures and then some in one purchase.

Included in the Collector's Edition will be the Disney Infinity Starter Pack, which holds a game copy, the figure base, Avengers Play Set, two Power Discs, and three Avengers characters: Thor, Iron Man, and Black Widow. Additionally, it will include all of the other Avengers characters that would normally be sold individually (Hawkeye, Captain America, and Hulk) plus a special diorama stand to place all the figures on. The stand features a Disney Infinity version of a Frost Beast from the Thor movie that also lights up in the dark. What's interesting here is that Captain America and Hawkeye will be sold separately at the game's launch, but Hulk is scheduled to be released at a later date. However, Hulk will be included in this Collector's Edition, making it the only way to get him early. This doesn't mean that other Disney Infinity characters would be available at launch, though. As mentioned in a previous article, Maleficent and Merida will be playable. as well as recently the revealed Stitch, Tinkerbell, and the entire Guardians of the Galaxy team: Star-Lord, Gamora (included in their own Starter Pack), Drax, Rocket, and Groot.

This edition will release at launch with the normal retail version this September 23rd. Unfortunately, there currently is no price tag announced for the Collector's Edition just yet, but there is a special PS3 (12GB)/Disney Infinity: Marvel Super Heroes Starter Pack bundle that will be available for $249.99 this fall as well. The normal Starter Pack is currently going for around $74.99.