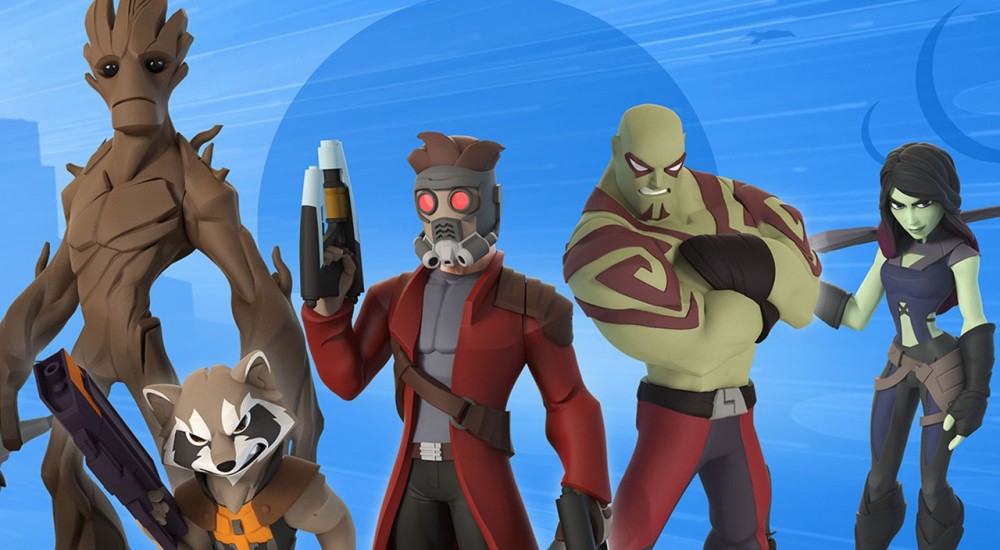 We've touched upon the team entering into the Disney Infinity fray, but we haven't focused on them specifically. Without further adieu, meet the Guardians of the Galaxy playable characters featured in Disney Infinity Marvel Super Heroes!

If you haven't seen the movie this past weekend, I highly recommend you all go and see it (it's shattering August records). What better way to experience the movie that by playing the  Guardians within Disney Infinity. As of now, the following Guardians will be making their appearance in the game: Star-Lord, Gamora, Drax, Rocket, and Groot. Additionally, as we previously covered, the villain Ronan will also be available as well (In the second wave of released characters, mainly the villains). All these characters correspond to the Guardians of the Galaxy Play Set, which features the cityscape of Knowhere. Both Star-Lord and Gamora will be included in the Playset, while Drax, Rocket, and Groot will be sold separately as individual figures. While Iron Man (part of the Avengers Playset) and Nova (part of the Spiderman set) aren't technically a part of the Guardians Playset, they will be able to participate in select missions due to their comic connections to the Guardians.

As shown in the gameplay, Star-Lord has lots of gunplay about him, with the ability to use his rocket boots to maneuver around the environment. Gamora is an agile character, using her fancy swordplay and martial art skills to bring down foe after foe. Drax on the other hand is an absolute powerhouse and expert killer, favoring the use of his dual knives to stick it to the enemy. Rocket is, of course, wielding his abnormally huge weaponry and can unload into dozens of enemies from afar. Finally, Groot uses his tree-like features to attack with branches and uses brute force to brush enemies aside like a pile of leaves. Apart from the actual Playset and Guardians themselves, the Disney Infinity: Marvel Super Heroes Starter Pack will include two Toy Box Game Discs with it, one being a Guardians of the Galaxy themed item! The "Excape from the Kyln' disc pits players in a race against time, escaping a space prison and collecting treasures/upgrades. In addition to this Game Disc, Wave 1 of the Marvel Super Heroes Power Discs will introduce some connected to the Guardians: "Space Armor" which is a costume change for Gamora (with added bonuses) and "Marvel Team-Up: Yondu", which allows players to summon Guardians character Yondu to do battle (he's the one that whistles a lot in the film).