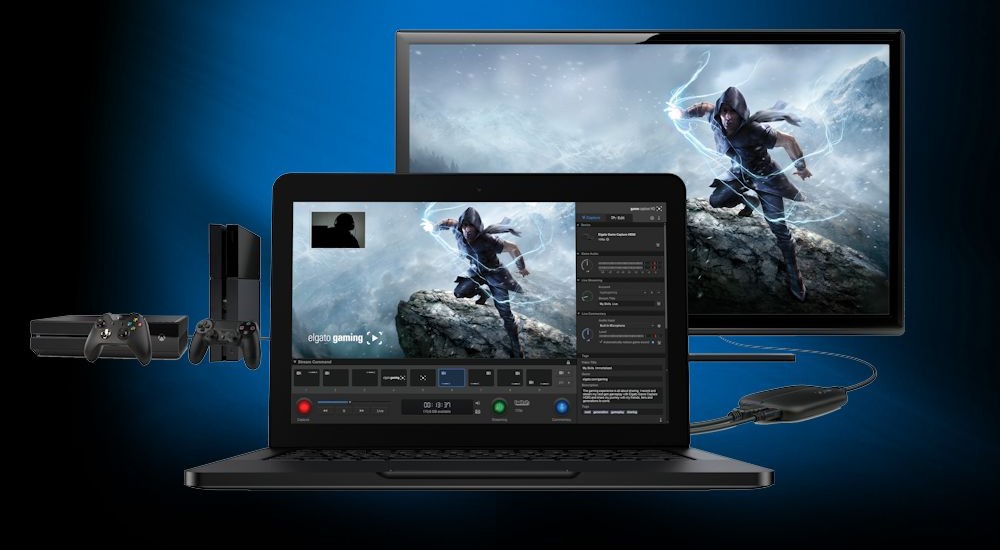 A few years ago Elgato released a device called the Game Capture HD. The small device allowed gamers to capture video from their Xbox 360, PlayStation 3 or other HDMI device right into their PC. Today the company have released a new version of it, the Elgato Game Capture HD60. It's a minor update to an already great product with the biggest improvement being the ability to capture 1080p 60fps video.

With both the Xbox One and PlayStation 4 touting games running at 1080p and many developers pushing to hit 60 frames per second, this is potentially a big deal for streamers and YouTubers. YouTube recently updated it's player to support 60FPS video at 1080p resolution making this even more important for someone looking to build an audience and differentiate him or herself.

Inside the box is the new Elgato device, a six foot USB cable, and a three foot HDMI cable. This is all you need to hook everything up. Simply unplug an existing HDMI cable from you TV, plug it into the Elgato HD60, then plug the output of the Elgato into your TV. Run a USB cable to a PC or a Mac and you're all set to begin capturing.

It should be noted you can only capture and stream video via a device that uses an unencrypted HDMI signal (that means no HDCP). While the Xbox One supports this out of the box, the PS4 requires a setting to be switched in the options menu. You'll only be able to capture games though, as soon as you fire up a blu-ray on either device HDCP is forced on. We did encounter some issues from time to time with HDMI syncing between devices, but a simple restart of the HD60 or television fixed it almost every time. The software itself is divided into two sections - Capture and Edit. Under capturing you can set up services for streaming like Twitch, YouTube and others. You can even tweak things like bit-rate available for your streams, add in overlays with objects like images and webcams, and can even pick what Twitch server you want to use to stream to.

One feature I really like is the ability to output your stream's video pieces into separate files for later editing. What this will do is take your commentary audio track and your webcam's video and put these in separate files other than the main game's video. Then you can use your favorite editing program and combine as needed to create a much nicer production.

The HD60 also buffers all video through the device, much like NVIDIA's ShadowPlay software solution. If you aren't actually recording you can buffer back in time and record a cool highlight in a game you might have missed. This is nice if you don't want to leave things recording non stop. I checked out Diablo 3: Ultimate Evil Edition on PS4 with the HD60. I was able to stream and simul-record with ease and the quality and look of the recorded video is top notch. Here's the raw 1080p video. As you can see, it's incredibly smooth. Almost...arcade like. I was able to hook up my NVIDIA Shield as well and play both native Android games and stream content from my PC and capture it no problem.

I streamed to our Twitch Channel, adjusting bandwidth settings and overlays. I had a few issues with Twitch trying to keep up if I cranked the bitrate too high, so I settled around a 4Mbps 1080 stream which gave really good quality to our viewers. The software will automatically set the Twitch Channel title and game for you which is a nice touch as well.

The HD60 will set you back $179.99. It's not the cheapest option, and many might wonder why you would spend the money when the newer consoles offer streaming and capture natively. What the HD60 gives you is flexibility and quality. On both the PS4 and Xbox One you are limited by resolution and in some cases time, for how much you can record or stream. Using a dedicated capture device allows you to easily capture more content on any device and in this case, at the highest resolution and frame rate possible.

While you'll still need a video editing suite in addition to the Elgato software, for the most part everything you need is in the box. If you owned the previous Elgato Game Capture HD it might not be worth upgrading, as the software should have most of the new features integrated into it with the latest update.  The only advantage you'll see is a smaller device and 60FPS recording options. If you want to stream and record simultaneously, then utilize the assets to create a production quality video for your audience, a device like the HD60 is crucial.