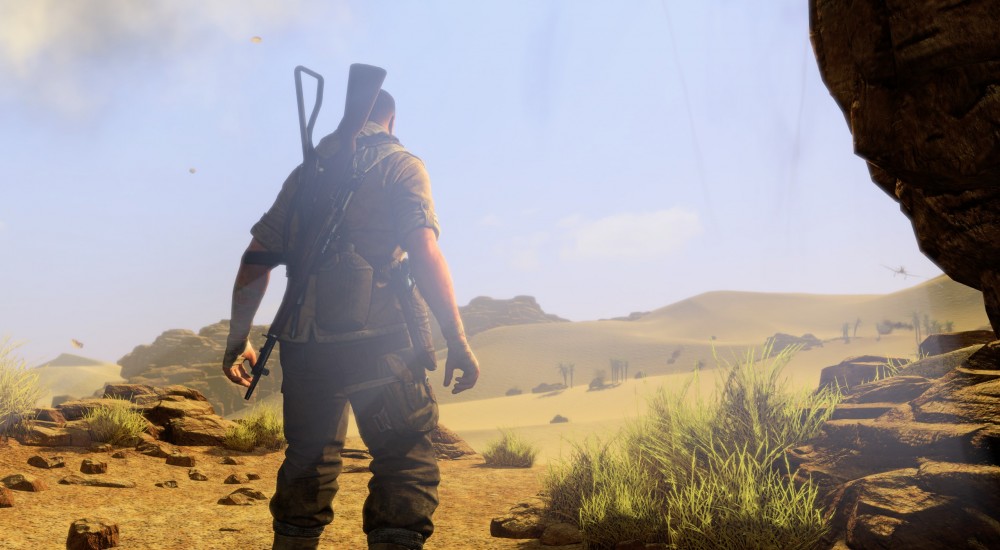 My first foray into the Sniper series was with the Nazi Zombie Army four player co-op titles released by Rebellion a few years back. These spin off games, while a lot of fun in their own right, didn't capture exactly what the Sniper Elite series was all about. While NZA still included the over the top slow motion kill cams that made the series famous, the game was more relentless in its action. Sniper Elite on the other hand is a stealth game that doesn't always require you to be stealthy. It's about patience, something you didn't have the luxury of in NZA.

Sniper Elite 3 is once again set during World War 2, this time during the West African campaign. This means instead of the cramped and crowded streets of the European campaign's city based missions from V2, you'll be out in the wide open and bright desert. It's a nice change of pace to play a bright and colorful shooter like Sniper Elite 3, in a campaign rarely explored from WWII. The maps themselves are a huge change, giving players the option to complete main and sub objectives in any order, instead of a linear progression through city streets and building. Graphically the environmental visuals stand out, with these vast desert landscapes brimming with plenty of foliage and brush to mask your sniper. The texture detail for the rock, sand and brick is top notch and really one of the game's standout features. The most notable feature in Sniper Elite 3 is still the slow motion kill cams, which trigger in on brutal headshots and critical hits on enemy bodies. You'll get an X-Ray view of your bullet's damage as it shatters bones, pierces vital organs, and generally causes massive damage in the human body. It's completely over the top, brutally violent, and completely laughable. I also love it. New to the game is the ability to take out vehicles with well placed shots, and throughout the campaign there are plenty of trucks, carriers and even tanks you'll want to destroy to make your life easier. Even these objects have a new kill cam, giving you an inside look at an engine as your bullet causes an internal combustion explosion. Completely unrealistic, but once again, totally awesome.

We make it even more ridiculous in this video.

As I said, Sniper Elite 3 is a game about being stealthy, but it's not completely unforgiving in that department. Should you alert some guards by being spotted, or give away your position by firing off too many rounds at the wrong time, Sniper Elite 3 won't completely punish you. The game utilizes a relocation element allowing you to sneak away unnoticed. Your last “known” position to the AI will always feature a ghost on the screen of your character and a marker on your radar. Once successfully relocated, you'll know the enemies alert level will cool down shortly and you can resume your normal headshots.

The biggest mechanic in the game to staying hidden is utilizing sound to mask your sniper rifle shots. Your shots should be timed with generators, engine backfires, thunder, and artillery guns to camouflage your position. Of course you can't just shoot an enemy standing next to another, so you'll also want to try to isolate each soldier. Sniper Elite 3 has a few tools in your bag including the standard rock, which can be tossed to send a guard investigating, to a new tool called the flint and steel which allows you to start small fires (or explosions when place next to a convenient explosive device).

Of course luring enemies is only part of the puzzle, you'll need to protect yourself while sniping. Once again your tool bag becomes a necessity with explosive items like trip mines, land mines, and dynamite. Covering your back with a tripmine not only alerts you of incoming enemy, but gives the other enemies another focal point other than yourself.