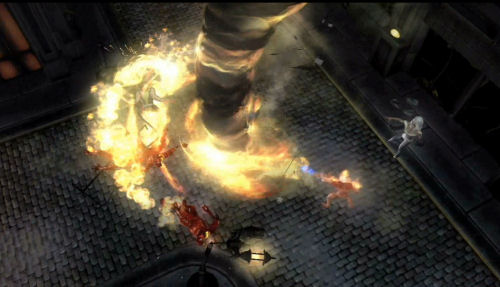 We had hope to bring you some hands on impressions of the latest Marvel Ultimate Alliance game today, but alas Activision didn't have it for show during an event last night like previously planned.  No worries, we still have you covered with a brand new trailer from the game.

The trailer shows off some of the game's back story, which looks to be taking place during Marvel's Civil War arc.  What does that mean? In it superheroes are either for or against registration with the government, which causes a split between the "capes."

While the trailer is a mix of both CGI and in-game footage, we get a good idea of how co-op will play an important role in the game using the Fusion powers.  With this players can combine the powers of two characters to create unique powers.  As seen above, the Human Torch combines his flame with Storm's tornado for a flaming tornado.

We still hope to bring you some hands on impressions of this title this weekend from the NY Comic-Con Show floor.