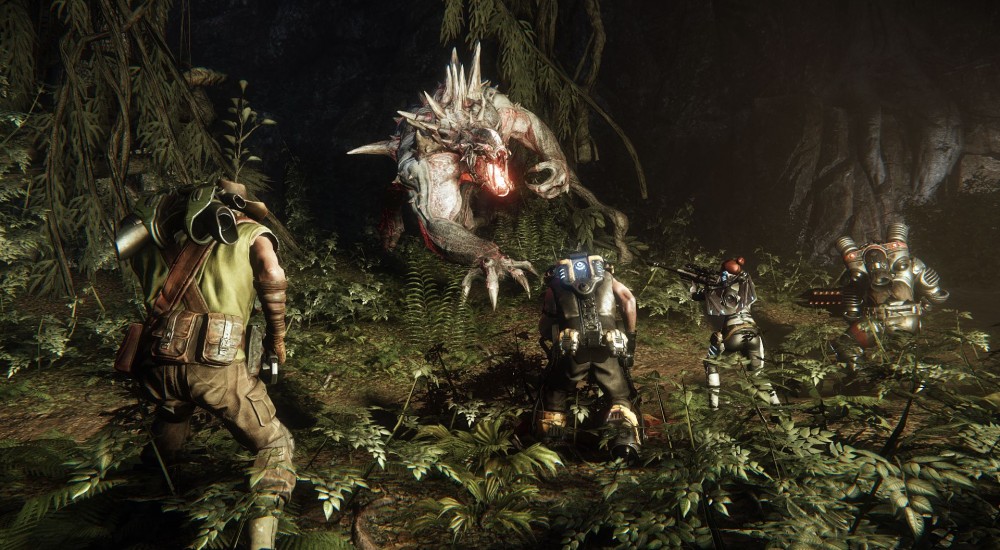 I knew this day would come!  Turtle Rock Studios, developers of Evolve, have finally seen the light and selected me, me, as the one to lend his creative juices to the development of the latest monster they're cooking up.  I've finally hit the big time, suckers!  No more typing away at the computer.  From here on out, it's flashing bulbs, fancy soirees, and seedy after-parties!

No.  No...wait a second.  It says here that it's...huh.  It's open to everybody.  Well then.  Give me just a moment while I try to piece together this fancy bottle of scotch that I smashed in celebration.  I suppose I'll need just a couple minutes to sew my shirt back together as well.  Please ignore the tears.

Well, since I'm back to the co-op news beat, I suppose I should dole out some information on what all this means.  Apparently, Turtle Rock Studios is looking for us plebeians to vote on what we think the fourth monster of their upcoming 4 player co-op game should be named.  In case you're interested, you should check out this video to get a sense of how their design process works.

As you've probably guessed, creating even a single monster of this magnitude takes months of design work.  Even after they've nailed down the general abilities and playstyle, the developers must then shift between playtesting and design iteration ad infinitum in order to create a final product that they're comfortable with showing off to the squealing masses.  It looks like a good amount of pre-design work has been done in order for them to narrow the name down to four options, which you can vote on using their survey:

While it's very impressive that they're leaving a design choice this large to the public, you would think that the artists would've come up with names more descriptive than, "Oh no, look out for that very large creature who is probably powerful and also very large."  Pre-ordering the game grants you the Monster Expansion Pack, free of charge, which includes this soon-to-be-named beast as well.  Not bad at all.

Evolve is slated to be really, really big all up in your grill starting February 10, 2015.