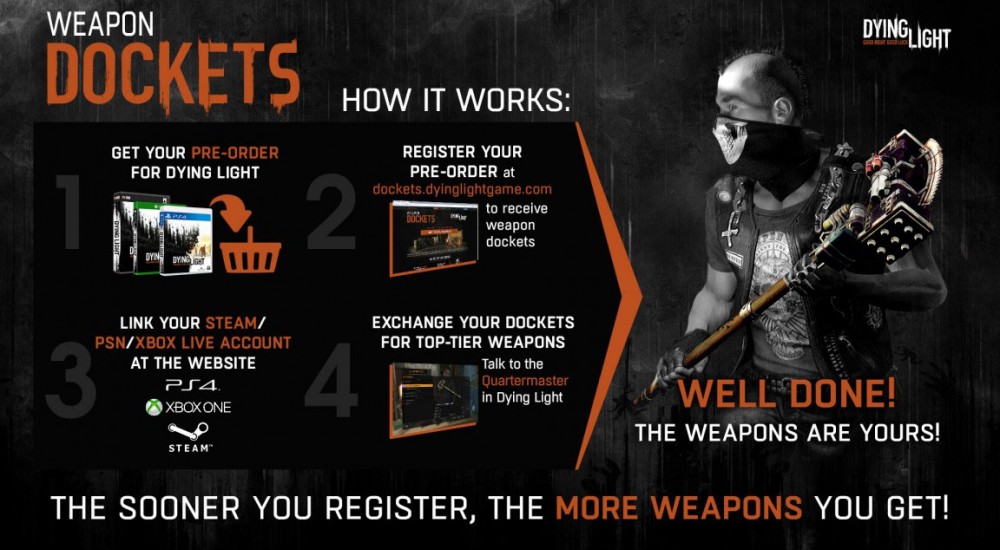 Techland has recently announced a pre-order bonus for their upcoming action survival game, Dying Light. The bonus is "weapon dockets," which each contain a high-tier weapon, and the sooner someone pre-orders Dying Light, the more weapon dockets they'll get.

The way it works is pretty simple. After pre-ordering the game, buyers go to the Dying Light website. There they'll have to make an account, register their pre-order, and link their Steam, PSN, or Xbox Live account (based on the system they pre-ordered on, of course). After that, players simply have to wait for the release of the game.

Each week leading up to Dying Light's release, a new weapon docket will be granted to all existing accounts with registered pre-orders, meaning that the sooner one pre-orders, the more dockets one will receive. On the game's launch, the cached dockets can be turned into the in-game Quartermaster for high-tier weapons.

This pre-order incentive is certainly nice for die-hard fans who knew they were going to get the game regardless, but might provide some niggles of annoyance to people still on the fence, or people who have to wait closer to release to fit the game into their budget. What do you guys think? Were you already pre-ordered and this is just icing? Was this enough to make you want to pre-order? Or did it swing you in the other direction, and now you don't want to buy the game until after you learn more?

Dying Light will be released January 27th, 2015 with support for 4-player online co-op on PS4, Xbox One, and PC.