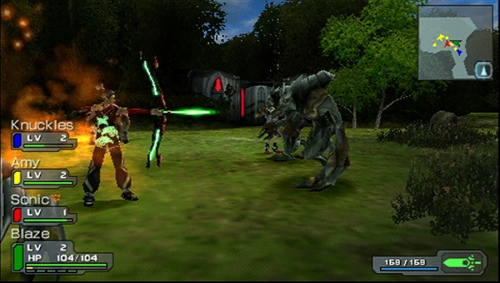 If you are looking to try out Phantasy Star Portable, a game that was recently bumped up in release date, then look no further than your PSN Store on either the PlayStation 3.  Sega has release a fully featured demo of the title, one that supports four player ad-hoc cooperative play.  As we mentioned before the game is set for a March 4th release date, a date moved up 3 weeks earlier than previously announced.

The demo itself seems pretty fully featured, it allows you to use a very in depth character creation tool.  You can adjust just about every feature of your character from the face, eyebrows, hair style and color, body type, etc.  Once completed you can either play through Story Mode or Ad-Hoc Multiplayer. The one thing fans of Phantasy Star Universe will immediately notice is there's no more walking around the hub world, instead you are greeted with a map overlay and you can choose characters to talk to via this.  Jumping into a mission is as simple as pressing the start button and selecting the mission hub.  No more running between regions trying to find out where to launch your mission from!

The gameplay is pretty solid, it translates fairly well to the PSP.  Anyone who's played a Phantasy Star Online or Universe title will feel right at home.  I was also impressed as to how well the game looked graphically, the colors were bright and popped off the screen with some decent textures.

All in all Phantasy Star Portable is looking to shape up to be a decent game for the PSP.  The only downside is there's no internet based multiplayer, it all must be done locally.  Looks like it might be time to start posting some personal ads to Craig's List.