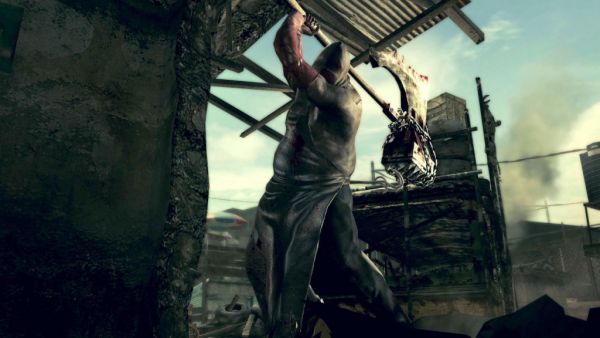 Resident Evil 5 doesn't officially come out till this Friday in North America, but that hasn't stopped folks from complaining about the game - mostly based on the demo that was released.  The MTV Multiplayer Blog sat down with  Capcom’s Jun Takeuchi, the game's producer, and discussed player reaction to Resident Evil 5’s controls, split screen co-op, and the lack of a Wii version.

The control issue seemed to be the biggest problem gamers had with the demo.  The developers knew it would come up, but according to them, it's not really an issue.  "We knew it was going to come up," Takeuchi said. "When you get your hands on the [full] game you’ll understand the choice we made with the controls."  This goes along with a lot of anecdotal evidence I've heard in where the demo was a really poor showing of what the full game offers.

Another issue we've heard complained about is the split screen co-op implementation.  See, Resident Evil 5 uses a stacked box scenario with slightly offsetting screens.  This leaves quite a bit of black space on your TV, which some gamers don't care for.

Takeuchi explained the reason for that. “It was technically more difficult to make it like it is now than to split the screen in half," he said through a translator. Other options were inferior. Eliminating the black space would have made the players’ view of the action to wide. And it introduced another problem. Without pushing one view to the left and one to the right, the lead characters stood in one column: “Having them on top of each other made it a little difficult to play," Takeuchi said. “We felt that having the characters on different sides of the screen was the best way to play."

Resident Evil 5 and its two player co-op campaign hit the Xbox 360 and PlayStation 3 this Friday the 13th.