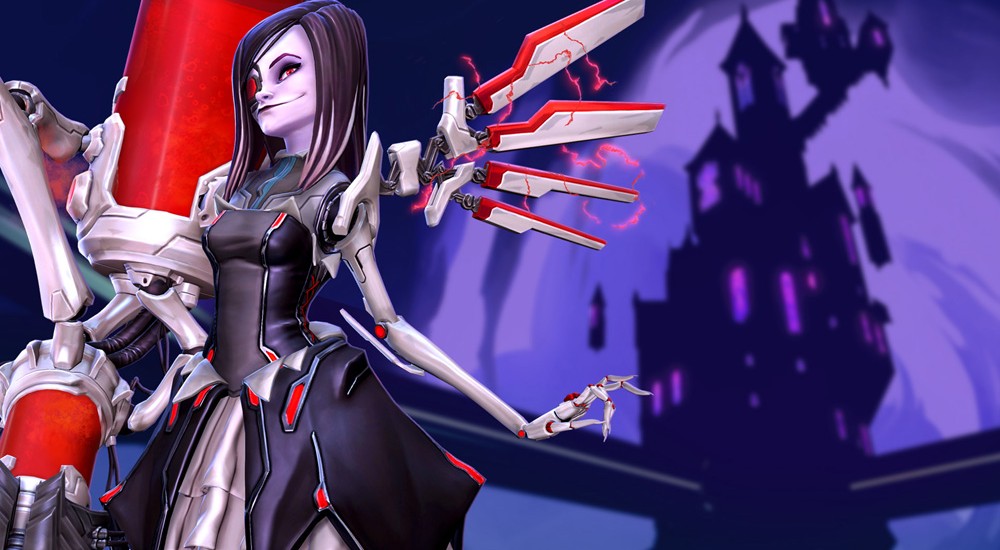 That's a whole lot to dig into, so let's break it down piece by piece starting with Beatrix. While Beatrix is now live in the game, she's still in a short "Early Access" period where Season Pass holders will be able to play her a week before she's released to the general public. That will be on January 26th, 2017. Beatrix can be unlocked for 47,500 in-game credits or with a hero key, which is included in the Season Pass.

Beatrix is the 30th Battleborn Hero of the Jennerit faction who specializes in shooting people (both friends and foes) with a giant syringe. You can check out her full skill set in the video below:

"Oscar Mike vs. the Battle School" is the third Story Operation DLC. All Story Ops focus on replayable co-op gameplay that award gear and character cosmetics. The first Story Op focused on Attikus while the second centered around Toby. This time players will be learning more about everyone's favorite over-enthusiastic idiot, Oscar Mike. As with all previous Story Ops, "Oscar Mike vs. the Battle School" is included in the Season Pass or can be purchased stand-alone for $4.99. A short trailer for the Operation is below:

Last, but certainly not least, several significant quality-of-life improvements have been made to Battleborn with the Winter Update. The first is that all 25 core heroes will be unlocked upon completion of the game's Prologue mission. If you used a Hero Key in the past to unlock one of these core characters, your Hero Key will be refunded to your account. The previous character unlock challenges have been changed to instead award a new champion skin for each character.

Two new training modes have been added to the game to assist new players in learning how to play each hero. The Incursion Tutorial helps players learn more about PVP play in a non-competitive atmosphere while the Dojo allows them to try out each of the Battleborn Heroes by slaughtering waves of minions. Also to support new players, small changes have been made to Story Mode missions to both award more credits as well as internally contain more guides or tools to lead players through the mission. General improvements include a UI overhaul so the UI is easier to use and cleaner to look at, an updated in-game Economy (introducing one consolidated purchasable loot pack called the "Core Pack" with improved drop rates), PS4 Pro support, and the introduction Draft Mode in public and private matches.

The Winter Update sounds extremely robust and a solid update all around. What do you think? Have you had a change to try out any of the changes yet?