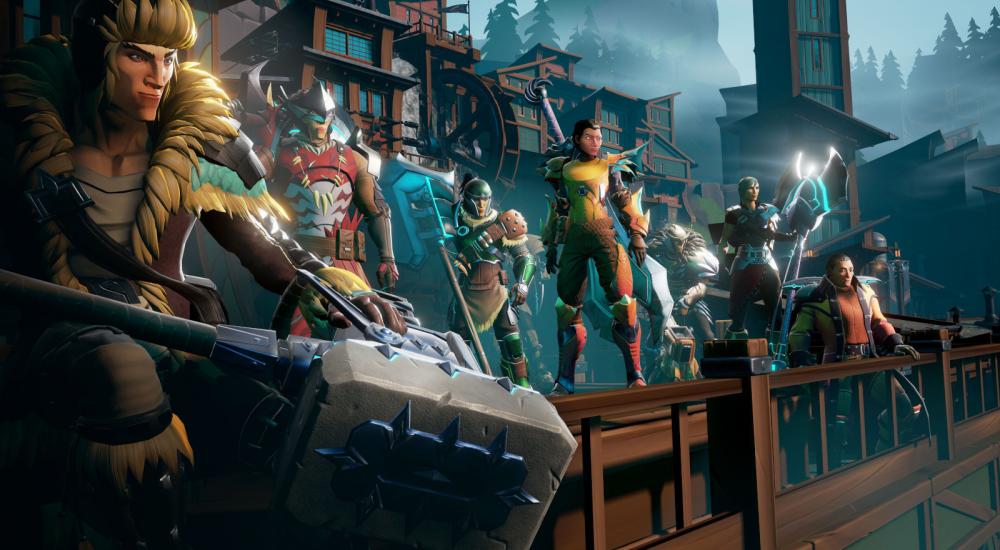 It's been almost two years since we first wrote up some early impressions of Phoenix Labs' Dauntless, and there have been a number of updates and improvements in that time. The biggest, of course, is the recent release on the PlayStation 4 and Xbox One with cross-play/cross-progression between BOTH of those consoles (whaaaaaaaaat?!) and the PC version. Mike, Nick, and Jason hopped back into the game this week to see how things are looking in the world of the Shattered Isles.

As a quick (and reductive) refresher to what Dauntless is, it's Monster Hunter without the... well, hunting. You choose a specific Behemoth (Pursuits) or type of Behemoth (Patrols) to go after, you gather your party (pre-made or matchmade), land in the small area where the Behemoth is, and then fight it. You need to do a little running around to find the Behemoth, but no need to first find tracks or sniff some... I'll say "clues," in order to see where it is and keep tabs on it. Not that all that stuff isn't fun, it's just Dauntless has pretty much condensed the whole experience down to "go fight this boss-like foe, rinse and repeat." You don't even have to skin the thing when you're done; parts that get broken off are automatically acquired and everything else is rewarded for completing the hunt. Then you're back in town to craft some new gear from your outing, all of which has a variety of different perks and bonuses to help you in your hunts. There are nuances to all of this - different types of Behemoths, strengths/weaknesses of the different weapons, etc - but it is a lot more straightforward and easier to get into than many of the Monster Hunter entries; Monster Hunter World partially included in that statement.

There's definitely a grind to this game similar to other titles in this same action-RPG vein. You'll be hunting the same Behemoths a few times to get all the parts necessary to craft the weapons and armor you want from them, and then you'll be hunting them again as part of the Patrols to get the materials necessary to upgrade that gear so it does more damage or provides you with greater defenses against the Behemoths' attacks. Your weapon and your armor both have "power" ratings that you can compare to the power rating of a Behemoth to see if you're going to have an easy or difficult time against them (something we failed to notice when we took on Quillshot). These provide you with a quick way to gauge how you'll fare in a particular hunt. The big problem with this, though, is how you upgrade your gear to make it stronger.

While the initial crafting of gear requires parts from a particular Behemoth, upgrading that gear requires special orbs that are tied to the Behemoth's element. In other words, if you craft armor from an Embermane (a fire Behemoth), then you'll need "Fire Orbs" to upgrade it. A few of these orbs can drop from the Embermane if you choose to hunt it directly (Pursuit), but the best way to get them is by doing Patrols that are associated with that element (i.e., a "Fire Patrol," or a "Shock Patrol"). The Patrols pit you against a random Behemoth that's associated with that type, which means you could be up against something you know you can beat, or a wholly new and more powerful Behemoth that will pick its teeth with your bones shortly after you take your first swing at it. It feels like there needs to be a split with these particular hunts where you can "lesser" Patrols against weaker monsters for fewer upgrade orbs (thereby getting stronger gradually) and normal Patrols that serve up the greater challenges and rewards.

That's not the only issue with Dauntless right now, either. There are, as you'll see in our recap video, some difficulties around matchmaking. Long queue times, even for private hunts, and not being able to back out of the matchmaking once it's started are not ideal for something like this. However, this game is still in Early Access/beta and the I'm sure that all the issues that come with trying to get three different platforms to work with another will be ironed out over time.

If you're thinking about hopping into the game for the first time, there are a number of introductory quests/missions to help familiarize you with the crafting and hunting. It definitely eases you into things and the "play with anyone" nature of things makes it really easy to play with friends and strangers. The random groups I've teamed up with for different hunts have been pretty friendly thus far, which is always good. If you're returning to it after a long hiatus (like us), then you'll notice a number of graphical/UI improvements and a few other additions, like new Behemoths to hunt and new gear to use. The game is free-to-play and it does include cosmetic microtransactions, including a "Hunt Pass" similar to the "Battle Pass" found in Fortnite.

Dauntless is available on PC, PlayStation 4, and Xbox One. Four player online co-op is supported in all Pursuits and Patrols. Nintendo Switch and mobile versions of the game are planned for release at a later date.