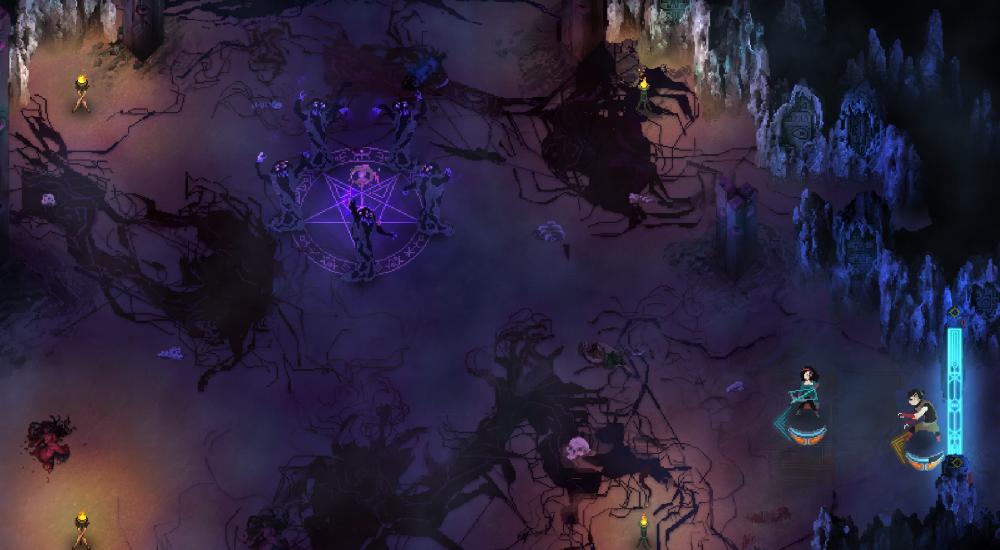 With the hustle and bustle that comes with last few months of the year, there are cases where good co-op games slip under our radar. Children of Morta absolutely falls into this category. Fortunately, we took some time this past Monday to rectify that and if you haven't checked out this action-RPG rogue-lite, then now's a good time for you to rectify it as well.

The title follows the Bergson family as they set out to put an end to a vaguely defined "Corruption" that is spreading across the fictional land of Rea. In order to stop the Corruption at its source, the Bergsons must enlist the aid of three guardian spirits by working their way through a series of dungeons that are randomly generated each time you enter them (that's the rogue-lite elements). As you progress, you'll earn experience and skill points that can be spent to unlock new skills/abilities (there's RPG part), and you'll also earn currency that can be spent between dungeon runs to unlock permanent upgrades to stats (such as health, damage dealt, etc) or to improve different mechanics, like the duration of buffs you get from shrines in the dungeons. All of this means that no matter if you make it all the way through a dungeon and beat the boss at the end, or die a few minutes into your journey, you'll always be progressing and you're never left with the feeling that you're stalling out with no way to move forward.

Check out our stream from Monday night to see what all of this looks like in action.

As we mention in the video, there are six different characters you can play (two initially and the rest are unlocked as you go) and each one has their own unique gameplay style and set of special moves. Those unique styles also means they have their own set of strengths and weaknesses. John, for instance, uses the traditional sword-and-shield so he's suited to getting in enemy's faces, however his shield has limited coverage so he's vulnerable to hits from the side or back. His daughter, Linda, opts for ranged attacks with her bow and can move and fire at the same time, but she doesn't have as much health as her dad and has no way of warding off attacks other than using a well-timed dodge roll (which has a cool down). Playing the game solo is absolutely do-able and presents its own challenge for those looking to put their hacking-and-slashing skills to the test. However, with the thematic focus of family and the ways you can mix-and-match characters, Children of Morta feels like a title that is best enjoyed with a buddy by your side.

For now, co-op in Children of Morta is limited to couch co-op only. On PC, you can get around that problem (as we did) thanks to the Steam Remote Play Together feature. On consoles, good news is on the way. Last month Dead Mage Studios laid out their roadmap of mostly free content they have planned for the game this year, and the 4th item on that list is "Online Co-Op." No timeframe is given for any of these, though, so it may not be until late Spring/early Summer that we see that go live.

Children of Morta is available on PC, PlayStation 4, Xbox One, and Nintendo Switch. Two player couch co-op is supported in the campaign once you clear the initial tutorial.