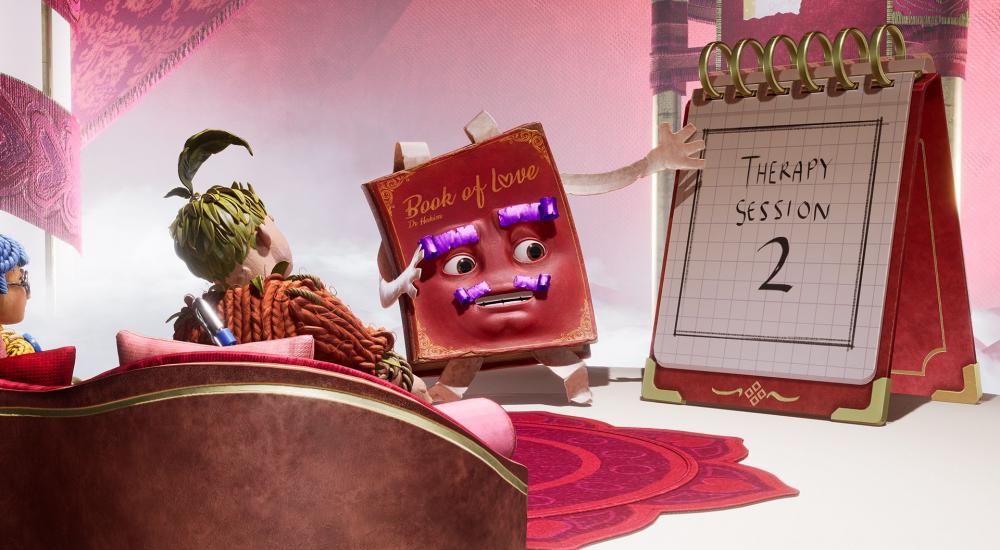 Josef Fares of Hazelight Studios has two major releases under his belt, both focused on narrative gameplay featuring two major characters. While 2013's Brothers - A Tale of Two Sons was a single player affair except on Switch, 2018's A Way Out was a full on co-op experience for two players as they attempted to break out of a prison. Now Josef and Hazelight are back for something decidedly different and honestly, all together fresh for video games.

It Takes Two is being billed as a romantic comedy with a colorful and playful ascetic that will instantly remind you of a Pixar movie with a splash of Little Big Planet. Players take control of a married couple on the verge of divorce. You and your co-op partner will help Cody and May learn how to overcome their differences after being literally shrunk into the world as clay dolls caused by their child's tears. I know, I know, that doesn't sound very light hearted or funny - but the production values and writing are absolutely pro and easily draw you into the narrative. Co-Optimus was recently invited to go hands on with the first few hours of the game and to listen to Josef Fares talk about their creation.

From the very beginning of our hands on with the game, it was clear the developers wanted you to be sucked into the world. Even inviting a friend and selecting your character takes place in such a way you never actually leave the story. From their we were greeted with the opening cutscene and soon we were controlling the mini versions of Cody and May in their tool shed at 1/12th the scale. It wasn't long before met Dr. Hakim, a "get well" book about love - who in reality, is a bit of an asshole. The character's movements, his interrupting nature, and his almost bullying of the characters into overcoming their challenges simply makes you uncomfortable - but I think that's the point.

From there we traversed the environment, collecting spark plugs to unlock doors, dodging saws, electric sparks, and fans. This level is setup with some platform heavy puzzles where players need to work together to allow the other player to progress. For example in one section I had to aim a vacuum tube at a platform as Locke jumped in and was launched to hit a switch that dropped a bridge. It's this combination of platform and situational awareness that was ever present throughout the level. Think of it like Portal 2, but with hand tools hell bent on killing you.

Finally we were confronted with the first boss, a giant vacuum cleaner that the couple tossed into the shed years ago. Now he has a clear chip on his shoulder for being deemed trash. The battle was a combination of dodging and launching exploding projectiles back at his head only to be culminated with one of the most disturbing "death" sequences I've seen in a while.

Each subsequent level progressed the story while adding new puzzle like elements and Mario Party-esque mini games. Whether we were leaping from tree branch to tree branch or teaming up to cover enemies in exploding honey, each game mechanic absolutely required both players to complete their side of it to succeed.

What impressed us most about It Takes Two is the sheer production values of the game. This is honestly one of the best looking games I've seen in a long time, the texture of it is jumps off the screen. Whether its the wood of the tables, the stitching of your character's sweater, or the blades of grass in the yard. It just looks and feels right when playing and instantly draws you in. The voice acting is top notch, with comedic timing and pitch perfectly executed.

Interestingly the game feature split screen play the entire time - whether you are playing on the couch or online. This offered unique perspectives to both players and helped with some cooperative puzzle solving scenarios.

With a March 26th release, It Takes Two is right around the corner. The few hours we played of the game feel super meaty and Locke and I were constantly chuckling during our playthrough. Josef told us during the interview that the game is 100% focused on the narrative - so don't expect crazy collectibles or a ton of replayability. Instead expect a 10-12 hour journey you can experience with a friend or loved one guaranteed to entertain.

It Takes Two is coming to Xbox One, Xbox Series, PlayStation 4, PlayStation 5 and PC. It'll feature two player local and online co-op when it's released on March 26th. Our time with the game left us incredibly impressed, and it'll be interesting to see if the game can keep that momentum through the whole story. We'll be sure to check it out when it does.

Be sure to check out our video playthrough of the game's first level right here.