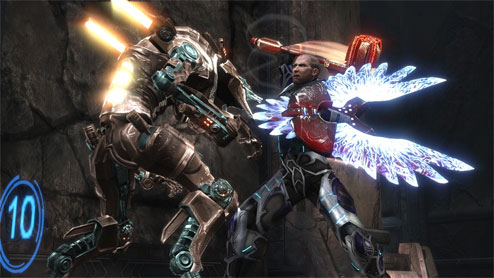 Grab your flux capacitors and get the 1.21 gigawatt batteries, folks!  It seems that by manipulating the very fabric of the space/time continuum, you can unlock all the character classes in the Too Human demo.  Joystiq has the details, but the basic idea is simple.  The demo was timed to unlock classes on certain dates.  The berserker class unlocked last Friday, and after repeated time-hops into the near future, it has been determined that the Commando will join the action on August 12.  If your Delorean is out of power, and no steam trains are nearby, you could always cheat and set your system clock ahead a year, if you prefer.  The Defender and Bioengineer remain locked even after these temporal somersaults, but they too can be unlocked.  Read on for the details...

1. Disconnect from Xbox Live.
2. In the Dashboard go to the "System" blade, and then enter "Console Settings", followed by "Clock".
3. Enter "Date and Time" and change the year from 2008 to 2009.
4. Return to the Dashboard.
5. Go to the "Games" blade, enter the "Games Library" and launch the Too Human demo.
6. Begin the demo and enter the Class Selection screen. You will notice you have automatically unlocked the Berserker and Commando classes by simply moving the date forward on your console.
7. But the Defender and Bioengineer remain locked...
8. To play as the Defender or Bioengineer you need to first move the screen to the desired class which is locked.
9. Then simultaneously flick the left thumbstick right and press A, to play the demo as a Defender or Bioengineer.
10. Enjoy and find a class to love in Too Human.