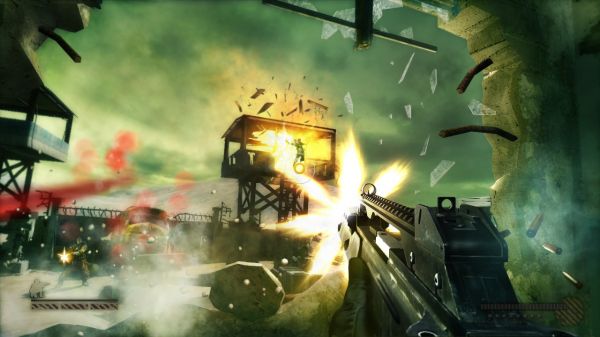 Codemasters, the developers behind the Overlord and Operation Flashpoint: Dragon Rising, announced a new FPS IP today called Bodycount.  The premise behind the game is that you're caught up in some shadow war between rival agencies and are tasked with eliminating high-profile "Targets."  Based on the announcement, though, that's just window dressing for what will be the main focus of the game: the shooting and the killing.  There are some rather interesting details in the announcement, such as no indestructible cover for enemies to hide behind, but the one that caught our eye was the inclusion of a "co-operative game mode."

Designed by Creative Director Stuart Black (co-creator and designer of Black, 2006), Bodycount is being created by an all-star development team using the EGO® Game Technology Platform, an evolution of Codemasters’ award-winning engine, for the Xbox 360® video game and entertainment system from Microsoft® and PlayStation®3 computer entertainment system and scheduled for release in Q1 of 2011.

“Our core focus for Bodycount is to deliver best-in-class gun play that places the gamer at the heart of the experience,” said Executive Producer Tom Gillo. “From the jaw-dropping devastation caused by firing into enemies or shredding the world around you in a hail of bullets, Bodycount will crystallise that moment of pulling the trigger into an exhilarating sensory overload of action.”

In Bodycount players become ensnared in a clandestine global power struggle as a powerful combat asset with a green-light to eliminate enemies known only as ‘Targets’ on behalf of the ‘Network’. Equipped with a mouth-watering selection of contemporary weapons, players and opponents tear through destructible cover to execute explosive kills in a shreddable world where operatives are encouraged to leave no witnesses. Complimented by online multiplayer and co-operative game modes, Bodycount will blast outrageous action and spectacular fire-fights from both barrels.

“We’re all massive FPS fans,” said Stuart Black, Creative Director on Bodycount “and believe that there’s room for a refresh of the shooter experience. If Race Driver: GRID™ was all about the purity of racing, then everything in Bodycount is absolutely centred on the bullet and its impact on the world. Our shredding tech enables us to create a different kind of gameplay, where players and AI can’t hide behind indestructible cover and rely on whack-a-mole mechanics. Here the environment is constantly changing as the game world is shot to hell; it’s going to be a huge amount of fun.”

In the UK, Bodycount debuts with a front cover of Xbox 360: The Official Xbox Magazine, which heralds the game as ‘the ultimate shooter’; the magazine is on-sale March 11th. An extensive announcement feature is also running in PlayStation Official Magazine on-sale March 16th.

Other gaming news sites, with details from the latest OXM, are reporting that one other feature of the game will be the ability to make your doors in a wall simply by pumping enough bullets in it.  So it sounds like it will be a very fun FPS-experience, but we just hope that the co-op mode will get as much care and attention as the rest of the game.