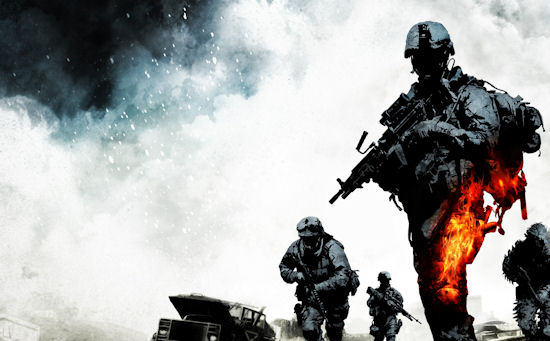 This Week in Co-Op Nick and Jim take the latest Battlefield: Bad Company 2 DLC for a spin.  Called Onslaught the $10 dollar download adds a four player co-op mode to the game across four maps.  Each map is vastly different but offers the same objective of progressing forward and capturing strategic positions.

How did Nick and Jim fair in the battle against their egos?  Read on.

Nick: “Well Jim, it looks like we made it.  The war is over, the battle is won.  I believe we killed a few hundred Mexi...err...destroyed a few dozen Afgha...uhhh...who the hell did we just slaughter?”

Jim: “All I know is they don’t speak English, and they was shootin’ at me.”

Nick: “Plus the fact that they had a tank didn’t help their foreign relations.  I gotta admit, I was a bit skeptical on Onslaught after having a negative experience my first time through, but when you challenged me to a hunting match it gave me a bit of an extra incentive.  Competitive co-op they say.”

Jim: “Your challenge acceptance while the map was loading was pretty boastful, but you pulled it off. For the record, folks: the kill count was 65 to 56 in my favor, but Nick was using a bolt-action rifle to my burst-fire M16 carbine. My experience with multiplayer should have won out, but Nick still has the edge.”

Nick: “My efficiency definitely paid off since we were only a team of two instead of the normal four for Onslaught.  Sure I may have been hiding in the jungle foliage on our foray in the Valparaiso map while you laughed maniacally as you ran head first at enemies with your iron sites up.  But I was covering your backside as the enemies seemed to spawn in from everywhere.  Holding those strategic points is a bit like a survival mode.  One miss from my sniper rifle and it was bye bye Jim.” Jim: “Still in gloating mode, I see. Funny that you mention survival-style play; it really is like that. From the sniper scope, you can actually see the enemies spawn in...but using simple iron sights allows the player to get sucked in a little better, because you feel surrounded by soldiers as they pile in from an unknown source. I’ve played with four players, with two, and by myself - to be honest, any less than four players is not for the faint of heart. It took everything we had to make it through three maps, and if I recall correctly we never finished the third one.”

Nick: “The particular stand we had on Atacama Desert was pretty impressive.  It took us a good 10 minutes to capture that point while wave after wave of guys attacked us.  We constantly needed to supply ammo and heal each other.  Turned out it was the one dude having coffee in the shop behind us that was stalling our efforts.  C4 did the trick.”

Jim: “I think it’s safe to say that your experience was better this time around, eh? Personally, I prefer to crank the difficulty down to Easy and push through the waves. I’ve played in Hardcore, which is just basically Easy mode without crosshairs (quite boring). I’ve found that co-op games can be less fun if the game is too difficult - ends up being a bicker session. Another subject for another day, though. What was your favorite moment, if you can remember any one in particular?”

Nick:  “There was a point on Valparaiso where we were pinned down by a tank and some enemies.  We didn’t have any decent weapons at our disposal and trying to get close to take out the tank proved futile.  So I threw some C4 on a nearby buggy and rode it headfirst into the tank.  At first I thought I was done for, but you told me I had time to get out and run for it.  I ran and pushed the detonator.  Bam said the lady.  What about you?” Jim: “I remember that, and it was pretty great. There were a couple that stood out to me, but that’s because I always remember a good surface-to-air chopper kill. Probably the most epic moment for me was when I stole that AT-4 turret and covered your advance; I hit one bad guy square in the chest with a rocket, which elicited a surprised outburst from you. That’s always fun. I love it when things happen in a co-op game that couldn’t have otherwise - the human element.”

Nick: “I was kinda pissed to see all the enemies I was sniping and tanks I was exploding weren’t giving me anything permanent to add to my Battlefield Online profile.  Sure you “earn experience” but it doesn’t actually save anywhere.  What “human” determined that?”

Jim: “Funny thing about that: the weapons and equipment available to you in Onslaught is determined by your multiplayer unlocks. So while the mode is roaringly fun (in my opinion), players who have invested more time in versus modes will ultimately have more freedom of choice and more replayability in Onslaught. Which to me is completely opposite of why a co-op mode should be employed.”

Nick: “ I think I played 2 rounds of versus before we did co-op.  It’s a good thing I rock with whatever weapon is given to me. ”

Jim: “You need a C-3PO-style ‘bragging off’ switch. You’re cramping my style. I will say, though - even with a limited arsenal there’s enough here to make a combat shooter fan like myself come back for more. Double-taps with the .45-cal Thompson, plenty of knife-to-face moments, explosions galore...it’s a shame the XP doesn’t get rolled in.”

Nick: “I’ll come back just to see if I can manage to kill us by piloting a helicopter on top of us again.  Who knew you could fly those things upside down?” Jim: “Another awesome moment! Which is why Onslaught appeals to me so much - trust me, I’ll be playing this for a long time to come. It’s obviously not everything it could have been - and is about five dollars too expensive - but every time I think a certain moment can’t be topped, another hour in the Battlefield creates a dozen new stories. We only played for 90 minutes or so, but I felt literally winded afterwards. I had a great time, and I’m up for another!”

Nick: “Maybe next time we can bring two more people into the fold, then I’ll only have to be half as awesome to get the job done.”