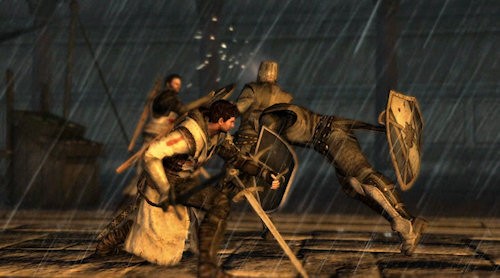 Atlus have released a brand new trailer for their upcoming two player cooperative hack and slash game called The Cursed Crusade.  The Xbox 360, PlayStation 3 and PC title features visceral combat set during the medieval crusades and looks to be a mix of God of War style gameplay meets Assassin's Creed style narrative and setting.

The trailer is called Ambitions and according to Atlus it "explores the fickle, easily tempted nature of men."  If by that they mean stabbing everything in front of them with swords, then yes, that appears to be the nature of men in this video.  Be sure to stick around for the "surprise" twist ending, my guess is that's the whole cursed part.