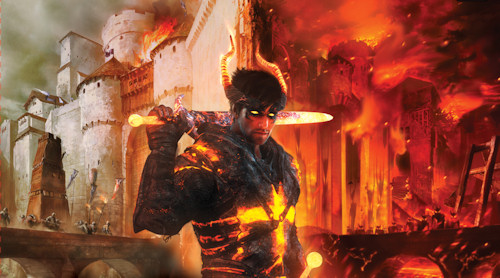 Atlus is well known for publishing unique, niche, but quality titles.  So it was a bit of a surprise to see the publisher announce a budget friendly price of $39.99 for their upcoming co-op hack and slash game, The Cursed Crusade.  With an October 11th release date, it seems Atlus set this price more so as a sales tool for the crowded holiday season, rather than a reflection of the game's quality.

The Xbox 360, PlayStation 3 and PC game will feature both local and online co-op play for two players through the entire campaign.  We've got a brand new video that looks at the game.

The video shows more footage than ever of the dreaded, hellish Templar's Curse, an affliction railed against by Denz and Esteban, the game's two protagonists.  Amidst the scorched, charred vision of Western Europe, the two adventurers must quest to save not only their lives, but their souls as well.