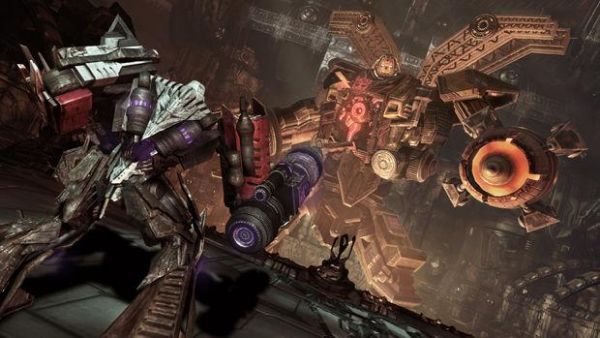 Now that is what I call a boss

Most modern games start by allowing the player to choose from a number of difficulty levels.  This used to be easy, medium and hard.  Nowadays you are likely to get something more akin to casual, challenging and eye wateringly painful.  As a casual coward, I opt more often than not for a lower difficulty level; I find experiencing a game’s story as entertaining as the gameplay itself.  However, when playing with my co-op pals I discover that they are no such wimps.  They crave the challenge of a tough as nails game; continuously repeating difficult segments in an urge to conquer the game, this is no chore for them, but grist to their mill.  How could I, a lowly casual player, enjoy myself on knee trembling difficulty?

Transformer: War for Cybertron is an excellent third person action title set in the universe of Optimus (Prime) et al. before they left their home planet.  Up to 3 players can work together to tackle the main campaign, any Transformers not taken up with a human will be replaced with AI – so three players will always be in the fight.  Having tasted the game in single player, and casual difficulty, I found it a bog standard shooter that lacked depth.  However, it was only until my co-op experiences on the hardest difficulty did the game truly opened up.

Each level in the game spans several chapters and can take a while to work through.  Two friends and I decided to tackle the Decepticon point of view first and, over numerous days, worked our way through the game; dying a lot, but managing to succeed.  That was until the final boss of the section *spoiler alert*.  Megatron, Soundwave and Breakdown must tackle a giant robot that dwarfs even them.  On its shoulders are launchers that fire rockets that can instantly kill and the boss’ only vulnerability, is a tiny area on its chest. *end spoiler alert*  My friends and I would seriously need to work together to beat the enemy.  Unfortunately, for the first 15 minutes this did not happen, over and over again one of us was killed – and in this game when one is out, all are out.  Death, upon death, upon death would surely fracture our friendship and lead to us never playing online together again?