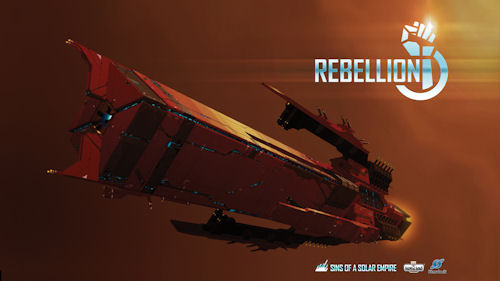 After several "micro-expansions" for the core game, Stardock and Iron Clad have announced the first major expansion, one that's stand-alone, called Rebellion.  Sins of a Solar Empire: Rebellion takes place after diplomacy failed in the uh...Diplomacy... expansion.  Because of this new factions are born from a splintered empire.

There's no details yet on if the co-op multiplayer is changed at all, but there is a new list of features for the game.  Highlights include improved graphics, new ships and technology, and of course new factions to play as.

·         New Corvette-class ships:  Small, highly maneuverable light ships that are adept at a variety of tasks.

·         Loyalist and Rebel versions of some of the existing Sins’ frigates and cruisers, each with their own unique strengths and weaknesses.

Sins of a Solar Empire: Rebellion is a stand alone expansion is set to launch in the fourth quarter of this year.  Owners of the previous game can purchase it for $29.95 while the cost to everyone else is $39.95.