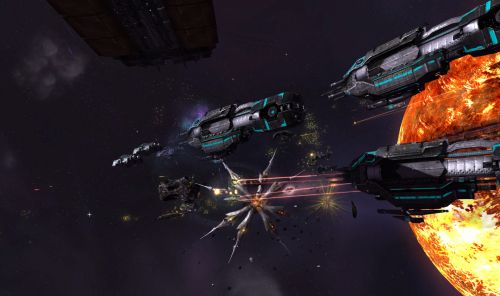 We really liked Sins of a Solar Empire: Rebellion.  And it looks like we weren't alone.  Stardock have announced that the game has sold over 100,000 copies via digital distribution channels.  The publisher was previously worried that Steam might have cannabalized their direct sales of the game, but instead, saw it only supplement them.  Obviously with direct sales Stardock is getting a larger piece of the financial pie, so they wouldn't want to cut into that.  Thankfully this looks like an everybody wins situation.

Here's where things get interesting.  Rebellion was Stardock's first major published title to go solely on digital distribution, with no retail product equivelant.  The game has sold so well that two other upcoming products will be skipping retail as well.

I remember it was somewhat dramatic in the community when we announced that Sins of a Solar Empire: Rebellion wasn't going to be at retail.  The reason was because we have moved away from having set release dates, which are largely announced for to kickoff presales, or for shareholders and retail distributors. Now we don't plan a release date until the game has reached a quality level where we feel comfortable doing so.

Retailers require a six-month lead-in to reserve shelf space for indies, and that's if you can get in. By contrast, with Sins of a Solar Empire: Rebellion, we didn't set a release date until after the public BETA feedback was universally positive.

That's a bit of an inside look at the industry there folks.  Extremely interesting stuff.

Sins of a Solar Empire: Rebellion is available now on the PC with the ability to have up to 10 players in a game for co-op play.