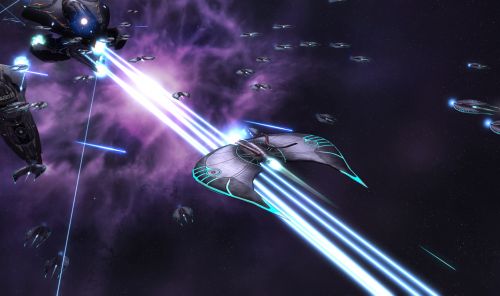 If you've never played a Sins of a Solar Empire game, it's probably a bit daunting to hear that a single level can take days to complete.  That's part of the charm that is this 4x strategy game.  Decisions you make echo throughout your entire gameplay session.  While the first Sins game focused entirely on combat, and the expansion added diplomacy to the mix - the upcoming Rebellion takes things a step further adding research victories as well as some alternates like last flagship standing, last capital and others.

Sins of a Solar Empire: Rebellion has six playable factions across three groups: TEC, Advent, and Vasari.  Each group has two factions: Rebels and Loyalists.  Further each group and factions offers unique abilities, ships, technology and research not found in the other.   After factions it's on to choosing a level to play.  Sadly Rebellion still falls short in this category compared to some other strategy games.  While there's no "story" mode there are plenty of levels to pick from, but the levels themselves are all entirely sandbox.  Unlike a game like, Civilization, there's no predefined challenge scenarios to take on. I put a few hours into a small map, conquering and colonizing a handful of planets as well as dealing with some pesky pirates.  Sadly my beta time expired before I got to attempt any of the new victory conditions or dig deeper into the new research and science trees.  My short time with the game reminded why I had put dozens upon dozens of hours with the original.  I really enjoyed some of the UI enhancements for managing larger fleets and keeping track of all your stuff across multiple worlds.  Overall everything just feels very polished, especially for a beta.

The good news on the co-op front is the game is now fully integrated into Steam, supporting voice chat and friend support as well as cloud saves.  This should make for an easier time getting a co-op game up and running.

Sins of a Solar Empire: Rebellion is out this Summer on the PC for $39.99.