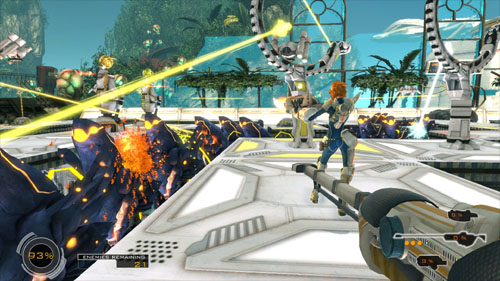 Have you ever had a moment when playing a tower defense game when you've sat back and marvelled at the insanity your avatar must be witnessing from their point of view? Upcoming indie tower defense game Sanctum won't leave these kind of crazy thoughts merely to your imagination, as it will put you head-on into the madness, FPS-style. The premise places you as an elite soldier whose home planet is being overrun by aliens. As with standard TD games, you'll be able to construct and upgrade towers (through a standard, zoomed-out perspective). Once the waves of enemies start, however, your character will also be able to actively shoot them with a variety of weapons from a first-person perspective.

Sanctum releases on PC (via Steam) on April 15th. It will initially support two-player co-op.