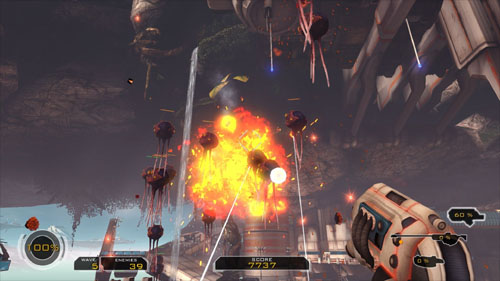 Indie TD/FPS hybrid Sanctum gets some free DLC next week, apparently including "new content and updates, as well as a map." Well, the map part is clear (which is excellent news, boosting the map count of the game from 3 up to 4), but as for what "new content and updates" details is anyone's guess. Coffee Stain Studios has revealed this is just the first of a group of content updates planned to release over the coming months. I'm fairly confident that one of these content updates will introduce 4-player co-op into the game (Sanctum currently only has 2-player co-op), a much-requested feature that the devs have said is in the works.

A new demo of the game will also be released next week, which will be a substantial update to the prototype demo released some time ago. If you're interested in Sanctum and haven't checked out our co-op review, now might be a great time to do so - we gave the game a solid 4 out of 5.