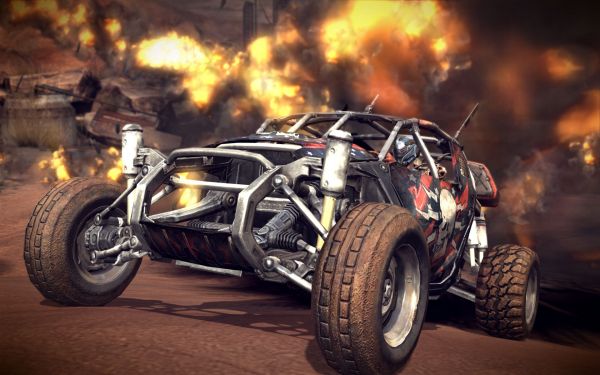 New details have emerged for the co-op features of Id Software's upcoming apocalypse IP, Rage.  In an interview with 1up.com, lead designer Matt Hooper went into some detail about the co-op capabilities of the game.  Another player will not be dropping into a host player's universe.  They came up with the 'Legends' idea:

"You know, when the sheriff of Wellsprings talks about the time when he and a couple of the boys walked into town after the Shrouded had taken over," stated Hooper. Hence, the separate cooperative mode called "Legends of the Wasteland," where two players work through a defined side-mission (such as the aforementioned Wellspring clean-up, or a cooperative version of Mutant Bash TV).

This sounds a little reminiscent of the "Echoes Mode" in Bulletstorm, where portions of the main campaign were segmented into speed runs, allowing players to compete for a high score. (Sadly, these were a single player only affair.)  The "Legends of the Wasteland" missions will be built for co-op:

The main differences in co-op look like increased enemy count and occasional puzzles (such as one player opening vaults or passageways, and the other player defending the opener or grabbing a now-accessible item). The team is still experimenting with how many missions total, or the exact structure (do you unlock missions? Or access all of them right away?) of this mode.

We'll bring you more information on these co-op "Legends" missions as it becomes available.  Rage is scheduled to release on September 13 for the Xbox 360, PlayStation 3, and PC.  It supports two player online and local co-op.