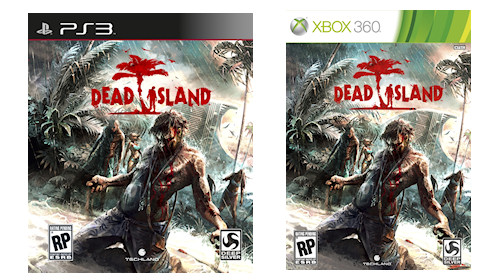 Publisher Deep Silver just sent over the official box art for Dead Island in North America on the Xbox 360, PlayStation 3 and PC.  Its not too revealing, though we have one kneeling zombie in the front who looks like he could be a companion to Nathan Drake on his next expedition - he's only missing the half tuck.  There appears to be a hurricane going on, which can never be good when trying to contain a zombie outbreak.

You'll also note the logo doesn't have the hanging zombie on it, just the shambling one.  We already knew this was happening.  It's ok though, I have a treat for you just below - and its not just a hanging zombie.

It's a hanging...swaying in the breeze zombie!

Dead Island is out this fall on the Xbox 360, PlayStation 3, and PC with four player online co-op.  We'll be going hands on with the game at E3 2011 next week.