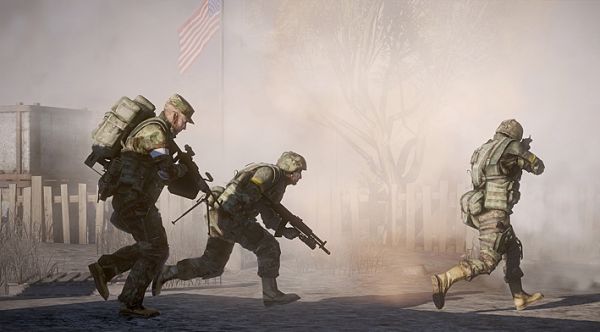 So...as you know, we - the staff - been tasked by Nick to hop online in any co-op game to play with random people in public matches. The process is as simple as it sounds, thanks to plenty of games with matchmaking options. Since the news of Battlefield 3’s two-player co-op was still fresh, I decided to give the Battlefield: Bad Company 2 Onslaught mode another spin.

In case it’s gotten stale for you: Onslaught is a survival game for up to four players online. There are four maps, and each one contains multiple flags to be captured in sequence. It’s difficult to fail with four players, even if they’re all lone wolves - for the most part you’re racing against the clock.

I opened my matchmaking settings to all difficulties and no map preference, and was thrown into a game almost immediately (sans the load time). Three other players were already getting the job done, but it was obvious they were much less experienced than I. Which is saying something.

In Battlefield, my biggest hurdle is not staying alive, since I’m usually playing counter-sniper with a long-range bolt action rifle...the biggest hurdle having enough ammo. After five minutes of picking off targets, my ammo is nearly depleted. In Onslaught mode, the targets are even more plentiful. And with only four players instead of 16 on your side, getting a refill or a health pack is slightly more difficult. Nonetheless, I ended that round with 43 kills and zero deaths.

Now I’ve got your attention. My heavy introduction - a solid 22 kills beyond the second highest scorer - was enough to get two of the three players on the mic for some righteous congratulation, and a little trash talk. We joked and challenged each other while the second map loaded, and then went back to playing hard when the class select screen came up. After reminding the others to drop ammo and health for the lowly sniper, I took the opportunity to drop a question on my newfound pubbie randoms.

“Has anyone seen the news about Battlefield 3 having only two-player co-op?” The reaction was a bit mixed. One random immediately spouted, “What? That sucks. Why are they cutting it? This mode is the funnest part about this game.”

The other was slightly less miffed, maintaining a positive attitude: “I do wish they’d kept it to four, but I’m just glad it has co-op at all.”

What we all agreed completely on is that the move by DICE seems to be inspired by Call of Duty: Modern Warfare 3’s Spec Ops mode. Unless there’s something really spectacular up their sleeves, Spec Ops is going to rule the mini-campaign territory with its local support and standalone progression system (unlocks, ranks, etc).

At this point, only one thing’s for certain: pitting the two behemoth shooter games against each other this fall is going to be a lot of fun.