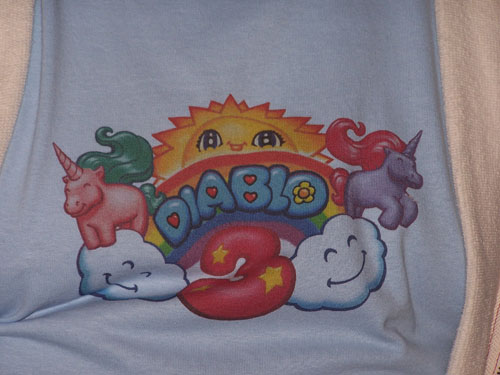 No cheeky commentary here, folks, we'll just cut to the chase and give you this quote from IGN's interview with Diablo III Head Dude Rob Pardo:

One of the controversies from the announcement in June was a slight backlash against the game's art style, which some of the fans complained about. Pardo said that they're sticking to the art style, and that for the most part it's a pretty moot controversy at this point. The Blizzard designers certainly have a sense of humor about the entire affair; some of them were spotted wearing powder blue t-shirts sporting a Diablo III logo that consists of balloon letters, unicorns, and rainbows.

I'll be maniacally checking Ebay for one of these shirts daily.  The words, they just fail me.  I think we need a "rainbow" tag for posts, Nick, pretty please?

Back to the co-op, Pardo reveals that five may not be the limit for players in Diablo III, as was reported earlier this year.  The team is currently looking at eight players at a time, but they fear that may be too crowded for co-op.  Pardo also dropped a hint that a console version of Diablo III may work out eventually, though focus is on the PC and Mac versions.  So, dear reader, as far as co-op is concerned, do you think eight is enough? *rim shot*