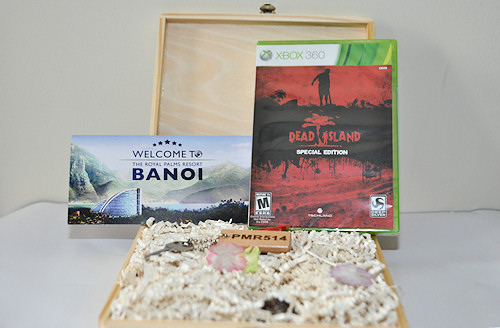 It's time for another give away folks and this one comes with some extremly rare and exclusive swag.  We're giving away one copy of Dead Island Special Edition for the Xbox 360.  But that's not the cool part.  We also have a custom wood case loaded with Dead Island themed goodies.  This case was given to press for E3 this year and you can't get it anywhere else!  Finally we're throwing in a copy of the Dead Island comic as well.

So how do you win?

We're giving you two chances to win this time - as we'll be picking a random winner from either Twitter or the site's comment section.

Your first chance to win comes from simply leaving a comment below and telling us the one thing you'd pack in your suitcase in case of a zombie apocalypse - but there's a catch - it has to get through airport security!

I want to win the exclusive Dead Island prize pack from @cooptimus - your prime source for co-op gaming.  #deadisland - http://bit.ly/oak3yH

Our winner will be randomly drawn on Thursday, September 15th.  Good luck and thanks for visiting Co-Optimus!