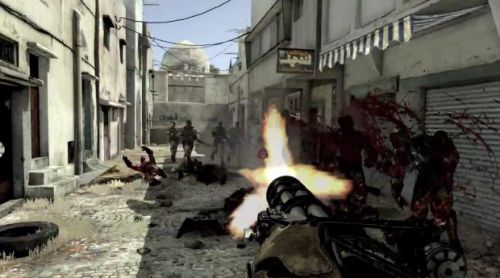 Just when I though I was done with this season's multiple co-op release weeks, they pull me back in.  This week we have a dancing game, an over-the-top shooter, and a wrasslin' title.  I trust you can figure out which is which.

Get Up and Dance (Wii,PS3) This dancing game features a four player group dance mode.  Each member will have to have a Move or Wii controller.  Fun Faux Fact: This is the 184th motion controlled dancing game to come out this year. 4 player local co-op

Serious Sam 3: BFE (PC) This bloody shooter has a ton of co-op options, including four player local split screen, which is almost unheard of for a PC title.  An incredibly reputable source has called the game "an absolute blast," and I'm inclined to believe them.   4 player local co-op, 16 player online co-op

WWE '12 (360,PS3) Three players can team up on one system in six man tag matches.  I haven't watched wrestling in over a decade, so I'll just look up a little info on Wikipedia so I can make a witty observation... Okay, I've been on Wikipedia for the past half hour.  Have you ever looked up a pro-wrestler on Wikipedia?  It's like a car wreck made up of hypnotoads and boobs.  You simply can't look away.  My day is shot... 3 player local co-op

Here we have the rest of the retail releases, complete with Amazon links. Please use them and help support Co-Optimus!