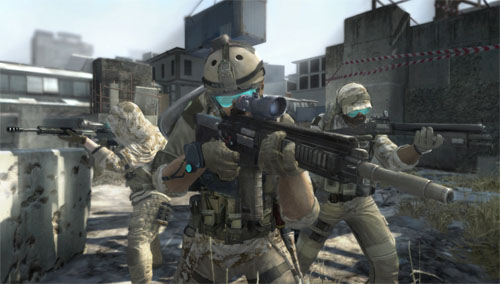 If you're a PC gamer (and especially if you're an FPS PC gamer), then you're likely familiar with what I like to call Short-End-Of-The-Stick-Console-Portitis. Okay, so I just made that up now, but the heart of the matter is true. With a huge amount of blockbuster titles being developed on the consoles, there's many a time that the PC port versions are lackluster, or downright close to broken. Sometimes these ports are months or years later. Sometimes they just don't come to PC at all.

One of the latest announcements in this vein regards upcoming Ghost Recon: Future Soldier. GR: Future Soldier will not be coming to PC. Why, you ask? Ubisoft's infamous concern with piracy, of course. Now, before I start gnashing my teeth about the innumerable issues I have surrounding this very topic, it's important to point out that Ubisoft is instead launching Ghost Recon Online for PC gamers. This will be a free-to-play, DRM-free game. It's unknown, however, just how similar the two experiences will be (the game is currently in beta).

On the one hand, it's extremely disappointing that Ubisoft is effectively cutting out the PC crowd from their cross-platform blockbusters. On the other, though, a different version is likely preferable to no version at all. Also, there's a small chance that a move like this could even be brilliant on Ubisoft's part. What do you guys think? Maybe to add some fuel to the fire, what do you think of the following quotes from Ghost Recon Online producer Sébastien Arnoult ?

We’re adapting the offer to the PC market. I don’t like to compare PC and Xbox boxed products because they have a model on that platform that is clearly meant to be €60’s worth of super-Hollywood content. On PC, we’re adapting our model to the demand.

When we started Ghost Recon Online we were thinking about Ghost Recon: Future Solider; having something ported in the classical way without any deep development, because we know that 95% of our consumers will pirate the game.