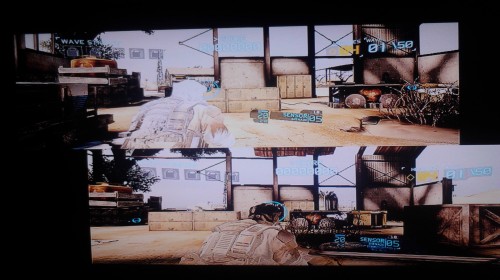 Ghost Recon Future Soldier does feature the promises couch co-op gameplay, but sadly it's limited to the game's Guerilla co-op mode.  This mode is a survival based mode where players fight through 50 waves of enemies.   A long time ago, in a news post far far away and more recently on various online retailers it was claimed that Future Soldier supported couch co-op gameplay through its campaign.  Sadly, that isn't the case.

We've been made aware of the presence of outdated information on UbiShop and several retailer sites stating split screen, cooperative play is available in Ghost Recon: Future Soldier's campaign.  We have ensured the information has been updated on the sites affected by this.

This is a common problem with games that offer different feature sets in different modes.  A quick glance at our own co-op games database entry for Future Soldier might have you think that a couch co-op campaign exists, it isn't until you look at the Co-Op Experience that you realize that's simply not the case.

We'll have our full review up of Ghost Recon Future Soldier this Wednesday.